Between 1914 and 1919, 424,000 Canadians served overseas. During that period the Canadian forces earned a reputation as the elite 'shock troops' of the British Expeditionary Forces. In part, this reputation was constructed by Sir Max Aitkin as head of the Canadian War Records Office in London and by publications pushed through the rigors of the censor (as the contents page of the December 1917 issue of the Maple Leaf magazine notes, it was “Passed by Press Bureau”  (BL Shelfmark P.P.4039.w.d.(6)).  This post looks at some of these remarkable records of that terrible conflict. 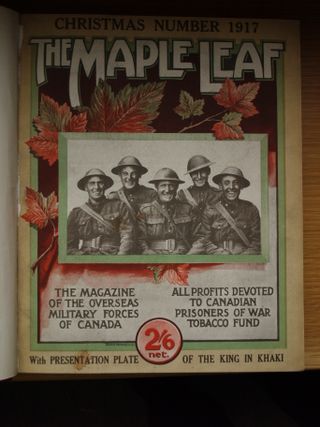 1. The Maple Leaf magazine began as a publication of the Canadian Expeditionary Force Pay and Record Office for the support of Canadian Prisoners of War, but its contents were also to appeal to the general public. It included short fictional articles, battle reports written by participants, humorous pieces and poetry. It also raised funds for the Canadian Prisoners of War Tobacco Fund, and helped in a campaign to send cigarettes to Canadian soldiers and prisoners.  Such activities were recognized by the command at an early stage as an important factor to maintain morale at the front; as the Maple Leaf claimed in 1916, “a parcel of smokes from home makes a man happy for days…”  The parcels of cigarettes also contained a postcard addressed to the sender so that the soldier might acknowledge receipt of the gift. 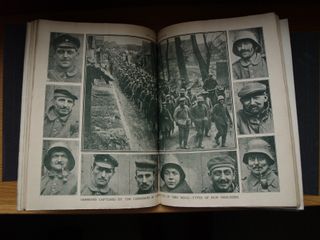 2. Although the use of photographic equipment was closely monitored at the front to prevent potentially valuable information falling into enemy hands, the Canadian War Records Office published the Canadian War Pictorial (BL Shelfmark: 9085.ff.4) until 1918, when the publication ceased. It published volumes illustrating the soldier’s life on the western front with pages of photographs interspersed by short essays. The British edition sold out within a week and the Canadian edition printings could not keep up with advance orders. 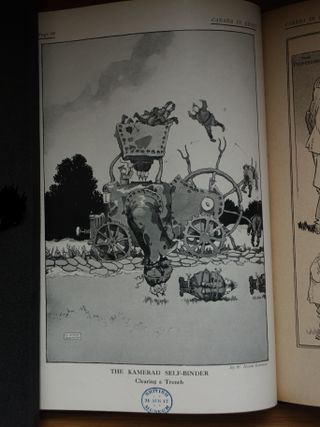 3. Canada In Khaki (BL Shelfmark: 12355.k.23) - another pictorial newspaper - was also a great success. The first volume published January 1917 sold 40,000 copies in the UK, leaving none available for the Canadian market. Canada in Khaki was made up of fictional short stories, humorous pieces, and patriotic poetry accompanied by photographs by the official photographer in both black and white and colour. It also contains cartoons from famous illustrators such as W. Heath Robinson (above).

These publications are not, strictly speaking, what spring to mind when one thinks of 'official publications'. However, the catalogue records all name the author as Canada: Army, Canadian Expeditionary Force. While it is quite clear that at the time these hugely popular periodicals fulfilled a propaganda role of boosting morale and maintaining the view of the war as heroic and just war in the public eye, over ninety years later we might reflect on this material from differing view points.

How Will You Remember?