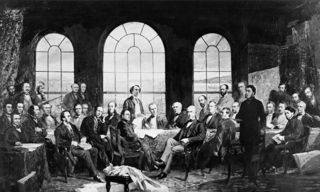 Photograph of painting by R. Harris (1884) The Fathers of Confederation. Image by J. Ashfield (1885) and courtesy of Library and Archives Canada

Today is Canada Day, meaning that the country is now 143 years old if you take the initial British North America Act of 1867 as a starting point. It is worth noting that contemporary Canada was not created by the Act, instead it founded the Dominion of Canada which evolved into the country we know today.

The British Library's Canadian collections contain a great deal of material about the founding and development of Canada in the form of manuscripts, government publications and commentaries from various Canadian and international perspectives. If you are interested to find out more our Help for Researchers guides are a good place to start, as is the Act itself. This is held in the British Laws and Statutes of Victoria, 30. Vict. Ch. 3 (Shelfmark: C. S. E. 41/11).

Another way to express your interest in the foundation of Canada would be to head down to Trafalgar Square today. Canada Day in London  is a celebration being held in the Square from 10:30am until 10:30pm and it offers an opportunity to experience some of the sights, tastes and smells of Canada in the heart of London. With the weather being so good I would highly recommend it.