[M.S. writes] Last week, Carole and I were pleased to be invited to a reading and discussion at the English Speaking Union, thanks to the U.S. Embassy.  The event marked Granta magazine's publication of a long excerpt from Samuel Clemens' reminiscences, which are due to be published in full this autumn after a century-long embargo. 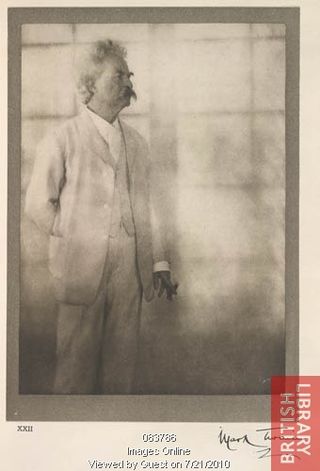 Bonnie Greer and Robert McCrum gave a U.S. (and Southern) and U.K. perspective, the audience provided some Southern context, and Kerry Shale channelled Huck and Clemens perfectly.  John Freeman(modestly introduced himself as 'just a guy', but also a guy who currently edits Granta) graciously kept the discussion moving along.  We also learnt that 'Mark Twain' echoes the call of safety made as ships reached the second fathom.  The only problem was that the power of Clemen's writing (which sounded powerfully modern, perhaps one reason for the emargo, as if Twain's literary ability could not be recognised in his own time because of his popularfame) summoned up such mouthwatering images of food and home-style cooking, our stomachs were rumbling.

We look forward to the full publication of the autobiography, and swear to revisit Twain's oeuvre.  Meanwhile, here's a rather grainy picture: 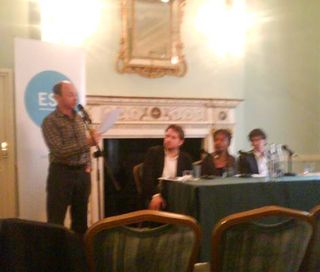 Mark Twain was an awesome figure...glad to see this post. Especially given there was such a long embargo.