Always facied driving from Mexico to Canada, but limited by time or worried by your carbon footprint, lack of car or travel funds?  Well, rather like the famous locomotive films of the Flying Scotsman, etc, now you can, thanks to Austin Leirvik.

The Right to Dry 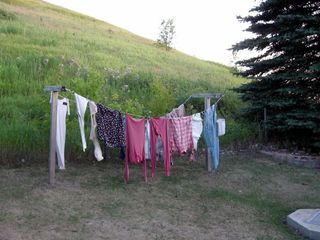 [M.S. writes] In one of those rather sad statistics that emerges in the news from time to time, usually lamenting the decline in the number of pubs or Parisian bars, the BBC reports that the number of launderettes in the U.K. has fallen to just 3,000.  The image of the launderette has always been one of the acmes of U.S. pop culture, as the adman Sir John Hegarty noted while recalling the successful marriage of Nick Kamen's boxer shorts, jeans, washing machines and Marvin Gaye:

"We wanted an egalitarian environment, somewhere you would find almost anyone, and the launderette had that. In our minds we were clear - it was New York in the 1950s, it's 4pm on a Saturday afternoon when he walks in. In reality we sourced the washing machines on London's Harrow Road."

There's another image, of course: that of the white picket fence with laundry blowing in the wind, somewhere on the American frontier.  Long-gone now, one would have thought, given the popularity of electric dryers.   But no: across the land, people are fighting for the right to hang out their washing in the face of fastidious clothes line bans and class-based aesthetics, arguing that the environmental cost of machine dryers is hard to justify (as well as it smelling fresher).

I'm sure there's a dissertation of some sort to be found here, should you be on the lookout for one.  It's got it all: suburban and urban aesthetics, class divisions, nostalgia, civil disobedience, gender relations, politics, economics.  There's already a Wikipedia page about it, some articles in the press, and even a film, Drying for Freedom.  Oh, and Florida, Colorado, Utah, Hawaii, Maine and Vermont have also passed bills forbidding the banning of clotheslines.  Sadly, it hasn't yet come to pass in this curator's block of flats, but perhaps I'll follow in Rob and Laurie Cook's footsteps, and put more than just my smalls on the line.

Team America has noted the increasing interest being paid to the North West Passage as the prevalent conditions of the Arctic shift and geopolitical opportunities are perceived.

Last week archaeologists in Canada used the latest technology in order to locate and create images of the ship H. M. S. Investigator, which lies submerged in Bank Island’s Mercy Bay. The Investigator became trapped in ice in Mercy Bay while searching for Sir John Franklin’s expedition, which had gone missing while attempting to locate the North West Passage. While Captain Robert McClure’s expedition failed to find Franklin and his crew, his extensive search of the seas to the North of Canada has been credited with finding what Franklin himself was looking for; a seasonally navigable channel that could be used as the North West Passage.

The logs and measurements produced by McClure and his crew were extensively published after they were rescued and returned to England. These publications are now part of the Library’s collections, so when I read about the Investigator being located, I thought I would order up The Discovery of the North West Passage by H. M. S. Investigator Captain R. McClure (edited by Commander Sherard Osborn, London: Longmans, 1856, Shelfmark: 10460.e.10.). The detail of the account is quite something and the maps in particular are worthy of note. If you follow the link above to the CBC story you will see a Google map at the bottom noting where the Investigator has been located; this location is marked pretty much exactly in the map provided below, from McClure’s account. Indeed it illustrates just how accurate naval mapping was and is. 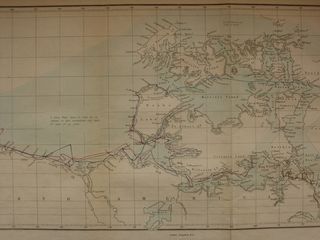 There is much more detail and nuance to the search for the North West Passage than this blog post can give. For more on our North West Passage collections there is an Online Gallery feature on the topic. And there are other materials related to H. M. S. Investigator in our Manuscripts collections [Shelfmarks: Add 35308 & Add 35309] and Maps [Shelfmark: Maps.C.18.b.11].

"His Excellence in the Art of Swimming"

The Londonist alerts us to the news that the journalist Matthew Parris came to an embarrassing, but thankfully not tragic, end to his attempt to swim the Thames at Rotherhithe (we quite like the tunnel there).  As the Londonist reports:

But the normally level-headed correspondent mixed up his tide tables and, slipping into the water before high-tide, ended up three-quarters of a mile upriver.

The Port Authority of London was apparently not impressed.

Nonetheless, we like his pluck, and call to mind an earlier visitor to London's fondness for watery expeditions.  When Benjamin Franklin found himself in London as a young man, he took to swimming (at least according to his rather puffed-up pages of his Autobiography) like a fish to water:

At Watts's printing-house I contracted an acquaintance with an ingenious young man, one Wygate, who, having wealthy relations, had been better educated than most printers; was a tolerable Latinist, spoke French, and lov'd reading. I taught him and a friend of his to swim at twice going into the river, and they soon became good swimmers. They introduc'd me to some gentlemen from the country, who went to Chelsea by water to see the College and Don Saltero's curiosities. In our return, at the request of the company, whose curiosity Wygate had excited, I stripped and leaped into the river, and swam from near Chelsea to Blackfryar's, performing on the way many feats of activity, both upon and under water, that surpris'd and pleas'd those to whom they were novelties.

Before returning to Philadelphia, a gentleman apparently heard of Franklin's aquatic abilities and asked him to remain in London to teach his sons how to swim. Ben, however, had to return (no doubt to invent something), and the Franklin School of Swimming remained unopened, and alas, unable to assist future natatory journalists.

Postscript: the cause of Parris's trouble was a muddle between GMT and BST in the tide tables; as ever, Franklin was here first, and came to London with recommendations for a more sensible daylight saving plan (and continued to promote his plan in Paris in 1784).