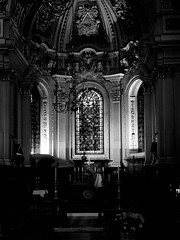 It was a busy weekend in London; those not watching Papamobiles or Pinarellos could also take advantage of Open House, and queue up to peek inside many of the city's architectural gems.  As a result, the curator of North American History found himself inside St Mary le Strand, a baroque stunner.

Although sadly showing some of the signs of ageing from its precarious position, stranded in the midst of a busy road, it is being bravely kept up by the efforts of the churchwardens (a plaque to their illustrious predecessors who spent most of the Blitz in the muniments room keeping an eye out for firebombs and then sweeping them off the roof can be seen on one of the walls).   Two of the beneficiaries of this care are brightly-restored paintings in the side walls of the chancel, by Mather Brown, a pupil of the more famous American painter, Benjamin West, and whose influence can strongly be seen in their style.  They were installed in 1785, a year before Brown, who had left America during the Revolution, painted the first portrait of Thomas Jefferson, during a visit to London as Ambassador to France.  The painting, which was owned by John Adams thanks to an exchange of portraits between the two friends, can now be seen in the Smithsonian.

Brown's career, which peaked not long after before a sad decline into penury (he died in 1831 at Barbara Hofland's boarding house,  with just Mrs. Hofland 'to weep over him, & moisten his parched lips with an orange'), is detailed in Dorinda Evans, Mather Brown, early American artist in England (Middletown, Conn. : Wesleyan University Press, 1982) [LB.31.b.7011]

Brown's autobiographical notes and list of engraved works can also be found in Thomas Dodd's 'Memoirs of English Engravers, 1550-1800', held by the BL's Department of Manuscripts (Add. MS. 33,397); there are also letters to Lord Liverpool at Add. MS. 33,587, f. 53 and Add. MS. 38,580, f. 18.  The bulk of the unpublished correspondence is held at the Massachusetts Historical Society.