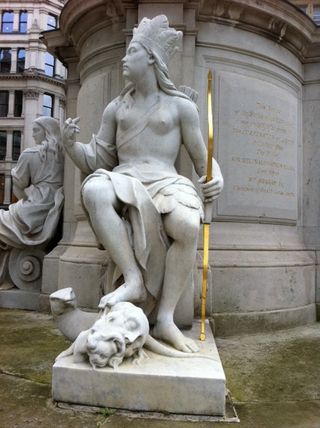 I was a little early at St Paul's this morning, where the annual Thanksgiving Service for the American community in London takes place, so I said hello to Richard Belt's Victorian replica of Francis Bird's 1712 sculpture of Queen Anne while we drank our coffee (it was a very cold morning).

At the base are four marble figures depicting the notional dominions of France, Britannia, Ireland and, shown here, America, with her foot resting on a severed male head and what an eighteenth-century guidebook called an 'alligator creeeping'*.  In 1813, the Gentleman's Magazine speculated that the head was supposed to be that of Oliver Cromwell.  Happy Thanksgiving.

Our German studies colleagues have been posting about Christmas markets and Germanic USA:

The Christmas market – whose organisers come from Frankfurt - has been an annual event for the best part of a decade now, and Leeds is far from being the only British city that has one. An appetite for painted houses and hearty food seems to have captured the English-speaking world in the last few decades. I saw the same thing in the Pacific north-west of the United States a month or so ago. Washington and Oregon both have more people of German descent than of any other ancestry, but that is not the only reason for the Germanic influences evident there. 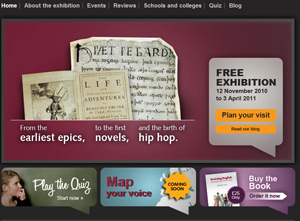 'Evolving English', the next big exhibition at the British Library, opens its doors to special guests this evening and is open to all tomorrow.  The excellent website is already live, the book is on sale, and if you are curious about one of the American items, you can read a bit about in on our previous blog entry, 'Milk and Honey Route'.

And, speaking of blogs, Adrian, Jonnie and Roger, the exhibition's curators, are blogging as well.