High Society at the Wellcome Collection

Yesterday, Jerry and I took a trip down Euston Road, along with some of our colleagues in Social Sciences, to visit the High Society exhibition at the Wellcome Collection and to take a peek around the stacks and conservation studios in the company of some of the Wellcome staff.  The exhibition is only on until 27 February, so I suspect this weekend will be busy (it was pretty packed yesterday).

For Americanists, peyote and Prohibition were present, and I was reminded of our strong collections of psychoactive and counter-cultural material held at St Pancras, as well as a huge range of sources for the study of Prohibition.   Recent acquisitionsfor the study of the role of psychoactive substances in society include Alice Lee Marriott, Peyote (New York, 1971) [YA.2003.a.33710] and Thomas Constantine Maroukis, The Peyote Road: religious freedom and the Native American Church (Norman, 2010) [YD.2010.a.12982].  I suspect some sort of guide is in order.

Finally, the Wellcome Collections Library has an excellent blog, which comes recommended.

From Punched Cards to the Census

I've spent a little more time this morning than I hoped on working out how to update my timesheet with a Saturday duty in the reading room.  We've just moved over to an electronic clocking-on system, and so I've been wondering a little about the origins of these systems - and what the Library holds in its collections.

For Americanists, the debate is moved interestingly by Mark M. Smith to the U.S. in Mastered by the Clock: time, slavery and freedom in the American South (1997), and is also considered by Cheryl A. Wells, Civil War Time: Temporality and Identity in America, 1861-1865(2005).  Historical overviews are provided by Gehard Dorhn van-Rossum, A History of the Hour: clocks and modern temporal orders (1996) and David Landes, Revolution in Time: clocks and the making of the modern world (2000).  A modest contribution to the history of the calendar should be published this year, too.  The social sciences are considered in Rene Adams, Timewatch: the social anaylsis of time (1995).  All can be tracked down on the catalogue.

Sadly, we don't seem to hold much original material on Willard Bundy, the originator of the puched-card timekeeping system.  He and his brother helped to found the company that went on to become part of I.B.M.   But the story is told in Lars Heide, Punched-card systems and the early information explosion, 1880-1945 (2009), which also emphasises the importance of early punched card systems to late-19th century U.S. censuses, bringing me to our new census exhibition, which opens soon in the front hall of the Library (an on which Ian, the curator, has done a great job).  There's a short preview on the 24 Hour Museum site, and a press release on Census and Society: Why Everyone Counts here.

74 of Thomas Jefferson's book have been recently discovered at Washington University in St. Louis.  Read the full story of the bibliographic big game hunt on the Monticello blog. 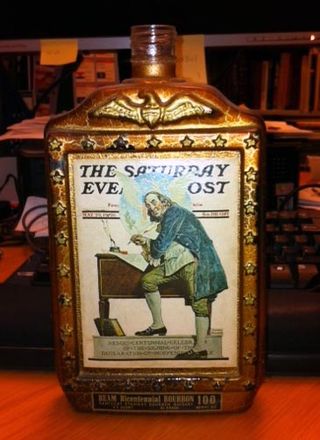 The Dulwich Picture Gallery is celebrating its 200th anniversary this year; I recently visited to take in the very-packed Norman Rockwell exhibition (on until 27 March).  The collection of Saturday Evening Post covers reminded me of this artefact, which ornaments our office, and makes use of Rockwell's Franklin cover.  I picked it up online in 2006, when we were doing an exhibition for Benjamin Franklin's tercentenary.  It dates from the sesquicentennial of the signing of the Declaration of Independence.  Sadly, when the whiskey bottle arrived, it already lacked its 4/5 quarts of 100 month-old Beam Bicentennial bourbon.

Before the 2011 film (and the 1947 film before that) was the book (and a radio dramatisation and a musical).  And before the book (published in London and Toronto) was the first edition: the 1938 New York publication of Graham Greene's Brighton Rock, published, I'm told, slightly before the British edition.  It is held at shelfmark 012604.l.23.

I recently ordered it up to the Rare Books Reading Room, and was pleased to note that it's been conserved as part of the Adopt-A-Book programme - by the listeners of BBC Southern Counties in 2003.  Clearly marketed by Viking as a thriller, it brought to mind the notes on the early blurbs to Greene novels in America, making him out as something of a pulpy English Raymond Chandler, a writer of 'entertainments' rather than serious novelist.  (Sadly, our copy is not housed with the Salter dust jacket.) 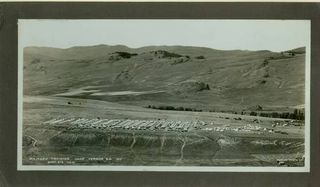 View of Vernon Military Training Camp, 1915 (by the Vernon Photo. Co.). Vernon was also the site of one of the war’s internment camps, operating from September 1914 to February 1920.

In October 2004, private members bill C-331 was presented to the House of Commons of Canada to ‘recognize the injustice that was done to persons of Ukrainian descent and other Europeans who were interned at the time of the First World War and to provide for public commemoration…’.  Under the War Measures Act, and against the advice of the British Foreign Office, several thousand men were interned in twenty four labour camps across the country, and around 80,000 enemy aliens were obliged to report at police stations.  Those in the camps were forced to give up their possessions for the duration and were obliged to undertake hard labour (although many were paroled into private work by 1917); many women and children also accompanied their husbands and fathers. Many of those not sent to their camps lost their jobs as a result of the stigma attached to their situation. Survivors and their descendents have since sought official acknowledgement and redress for this historical wrong.

The 2004 bill marked an agreement between the Ukrainian Canadian Community and the Government of Canada to set up the Canadian First World War Internment Recognition Fund. Since 2008 this fund has supported projects that commemorate those affected by Canada’s first national internment operations.

This project also provides an opportunity to award funding grants for primary research into this largely ignored episode of Canadian history.  Here in the Americas team we became aware of the Fund through their donation of the 2010 Annual Report which we recently received and which will find its way into the catalogue for general consultation. There are other material records of the internment camps in the Library’s collections, notably in the Canadian Colonial Copyright Collection which contains photographs of many of Canada’s wartime camps and exercise grounds, including a panorama of the internment camp at Valcartier.

U.S. history titles on the Civil War probably outnumber any other historical subject (although WWII may give it a run for its money); the same is probably true for the web.  As part of our Civil War project, we plan to curate some of it - selecting the best or the first ports of call.

Description: Linked to the National Archives exhibition (from 30 April 2011), but also serving as a guide to their resources, with an excellent guide to existing National Archive-related materials, such as Kevin J. Foster's 'The Diplomats Who Sank a Fleet:
The Confederacy's Undelivered European Fleet and the Union Consular Service' (Prologue, Fall, 2001).  The site and exhibition also sees things in global terms.

2. Southern Cultures: the sesquicentennial: how should we remember the Civil War?

Description: featured content from the University of North Carolina at Chapel Hill, including older articles and new essays focussing on the Civil War in collective (Southern) memory.  Links to selected articles from the journal Southern Cultures via Project Muse.

3. Places in History (Library of Congress)

Description: Beginning March 4, 2011 until April 20, 2015, the Geography and Map Division will post selected maps from its digitized collections relating to political and economic issues leading up to the Civil War as well as military maps ranging from maps of minor skirmishes to major battles during the week of the 150th anniversary of those conflicts. Each map is accompanied by text discussing the selected maps, as well as citations and references. The site will be updated weekly during the four year anniversary of the Civil War and a keyword searchable weekly archive accompanies the site.

Description: Drawn primarily from the collections of the Library of Virginia, Union or Secession: Virginians Decide presents private letters, public debates, and other records that allow Virginians who experienced the crisis between the autumn of 1860 and the summer of 1861 to explain their thoughts, fears, and decisions in their own words. Union or Secession also contains the life stories of forty Virginians who experienced slavery, the sectional tensions of the 1850s, the secession crisis, and the split of their state into two.

6. Life and Limb.  The Toll of the American Civil War (U.S. National Library of Medicine)

Description: The perspectives of surgeons, physicians, and nurses are richly documented in the history of Civil War medicine, which highlights the heroism and brutality of battlefield operations and the challenges of caring for the wounded during wartime. Yet the experiences of injured soldiers during the conflict and in the years afterwards are less well-known. Life and Limb: The Toll of the Civil War focuses on disabled veterans and their role as symbols of the fractured nation.

Commemorating the Civil War: "The War We Want to Forget"?

I was chatting with a colleague at Queen Mary, who mentioned the British reluctance to remember the commotion caused in the UK by the American Civil War (perhaps unsurprisingly, given our support for the Confederate, slave-owning South), so I was interested to read this article in the Art Newspaper, which Carole forwarded to me.

While museums and galleries were keen to celebrate the 200th anniversary of Abraham Lincoln's birthday in 2009, there has been much more of a disinclination to engage with the complex legacy of the Civil War (and perhaps a paucity of paintings).

"Compared with the Revolution­ary War with its clear-cut enemy—the British —," notes Eleanor Jones Harvey, the chief curator at the Smithsonian American Art Museum,"there is no glut of heroic canvases for the Civil War. “There was no market,” said Harvey, “for Ameri­cans fighting Amer­icans” ad­ding: “How do you commemorate something that we haven’t in a sense really gotten over?"

There are some exceptions - the Smithsonian, whose show Jones Harvey curated, and the Virginia Museum of Fine Art, for example.  And we'll be having a special website here at the BL.