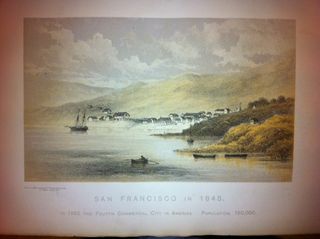 No, the title isn't a reference to a band playing at the Scala this evening, but the noted Victorian railway and public works contractor, Sir Samuel Morton Peto - the man who built the Houses of Parliament.  I've been looking at what maps we hold from the Civil War period for the sesquicentennial, and spent last Friday afternoon with Tom from Cartographic and Topographic Materials (a.k.a the Map Library) among the stacks, contentedly looking through volumes of maps wrapped in grey protective card: 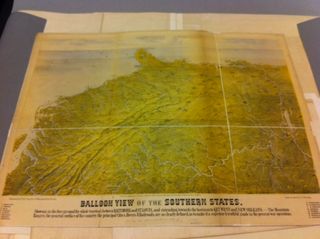 A couple of things struck me.  Firstly, the success and creativity of L. Prang, who cornered the popular market with a series of ever-more elaborate, nay gimmickry (See the Southern States from a Balloon!) projections; and, secondly, the British Museum's interest in collecting maps of the oil fields of West Virginia from the 1850s and 60s.  Some secondary reading led to the Funk Well ...and Sir Samuel Morton Peto, who gives a brief account of its drilling in his Resources of America (first published 1866).  As he noted: ﻿﻿﻿﻿'Indeed, now that Petroleum has acquired a commercial value, there can be no doubt that it will be eagerly sought for and abundantly found.'

As good a reason as any to have a good stack of oil-field maps.  Some more historical prospecting in this area may be required.

On Sir Morton Peto and the economic connections between Britain and the US at this time, see William Reynolds, ed. Peter K. Gifford & Robert D. Ilisevich, European Capital, British Iron, and an American Dream: the story of the Atlantic & Great Western Railroad (Akron, 2002).