Yesterday was a day of odd jobs.  One of them was checking a sales catalogue, which drew my attention to Jose Figueroa's defense of his explusion of the leaders of the Mexican Californian colony: his Manifesto (1835).   This title also has the distinction of being the first book-length item to emerge from the pioneer press of Agustin Zamorano (his sixteen-page pamphlet, Reglamento Provicional of 1834 also lays claim to this title). 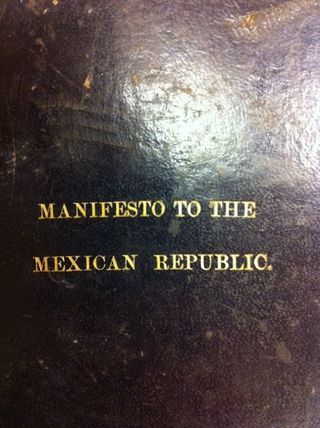 Our catalogue revealed a copy of this extremely rare title at 8180.bb.43 (only 9 institutional copies are listed on OCLC).  Up it came from the basements, and down I went to collect it from the Rare Books and Music reading room.  Sadly, the catalogue entry was not quite complete: the imprint was the San Francisco Herald Office, 1855, and the Manifesto, which we acquired in 1872, was moved from the pile marked 'North American Treasures' and added to the day's catalogue corrections (this record has now been amended).  I will also request some conservation work.

In reality, I wasn't too surprised: the catalogue entry did note that the item had been 'translated from the Spanish', and this pointed to the 1855 edition.  And, truth be told, the San Francisco Herald is scarce enough.  This, the first English translation, is the only copy held in the UK, according to copac.ac.uk; and only five copies are listed in the U.S.  It also has this delightful doodle on one of the pages at the back.  Optimistically, perhaps a Californian reader's imagining of Figueroa? 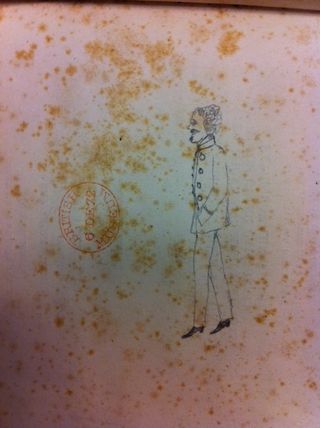 Meanwhile, no discussion of Californian printing would be complete without a visit to The Zamorano Club.

On the Manifesto, see C. Alan Hutchinson, trans. and introduced by, Manifesto..., University of California Press, Berkeley & Los Angeles, London, 1978, [X.802/10681].  As well as a balanced account of what Figueroa was about and a better translation than the 1855 version, this also includes a facsimile of the copy held at the Bancroft Library, University of California.  A copy of a letter from Figueroa is held at Add. MS.