On the Road: BAAS II 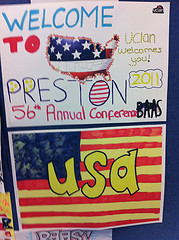 Back from BAAS, but I can't resist posting the image above, which was one of a collection produced for the conference by local schoolchildren.

Saturday and Sunday included more high-quality papers, and Heidi MacPherson's plenary on the transnational in literature - a concept that appears in a lot of other presentations as well.  For a does of pop culture, I attended the comics session, which looked at the 'dreamspace' might work as a way of interpreting graphic novels, Superman's colonisation of key moments of American history (and hence the American collective imagination), and ethnic cartoons in the early twentieth century.  It also gave me a chance to plug the Library's new acquisition, Underground and Independent Comics, Comix and Graphic Novels, available in our St Pancras, Colindale and Boston Spa reading rooms.

The conference wound up by Sunday lunchtime, but Alan Rice had organised a tour of places related to Lancaster's slave-trade history, including a visit to the grave of a cabin boy near Sunderland Point.