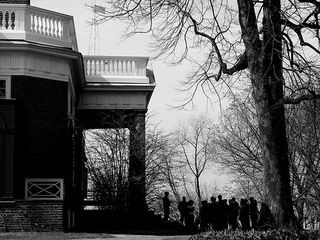 The Soane Museum Study Group arranges a series of talks on architectural topics.  Thursday night saw Danielle Willkens (the Bartlett, UCL) present a paper entitled 'A Case for Ruins and a Cause for Concern: the Digital Mulberry Row Project at Thomas Jefferson’s Monticello', a survey of the buildings provided for the enslaved workers at Jefferson's Charlottesville residence, with some natty 3D fly-through reconstructions and some thoughts about what happens when these places, people and activities are commemorated, reconstructed; or, as has more often been the place, erased from history.  In particular, she wondered what visitors take away from reconstructions of such sites, and, if the decision to reconstruct is taken (e.g. if they look spick and span, perhaps it looks like things weren't so bad), what period of habitation should be rebuilt: Monticello went through at least three phases of slave housing, from an a relatively dense and populated village, with a nail factory, to a more limited collection of more aesthetically constructed buildings.  I liked the suggestion that the neglected ruins spoke particularly eloquently of the social status of enslaved black workers, when compared to the attentions lavished on the main house.

All this is now a live issue, as Mulberry Row is the recipient of a NEA grant, and the Thomas Jefferson Foundation is now working on restoring and interpreting the Row, drawing on more than fifty years of archaelogical and historical work.  You can follow the process - and comment on it - via their blog.

All this reminds me of my recent visit to Lancaster, whose connections to the slave trade have only recently been brought to the surface and memorialised.  No reconstruction is perfect, and memorialisation brings with with it all kinds of cultural and aesthetic complexities, but there are also many dangers and potential hurts in forgetting as well.

Listed below are links to weblogs that reference Mulberry Row :