In Memory of the Patriots who Fell: Manassas and the Bull Run 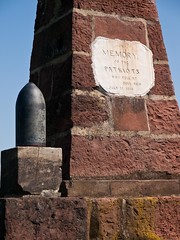 On 21 July 1861, around 62,000 men faced each other near the key railway junction at Manassas, a vital point on the route to the Confederate capital of Richmond.  30,000 of them were Union troops under General Irwin McDowell, most of whom were 90-day volunteers; the 32,000 other were Confederates under the generalship of Pierre G.T. Beauregard.  Both sides thought the day would be decisive and swift.  It was neither.  The Union forces, under the gaze of sightseers from Washington, watching on a nearby hill, were mostly routed by the Confederate troops who then failed to capitalise on their success and press on to Washington.  A year later, between 28 August and 1 September, 48,000 Confederates faced 75,000 Union troops at the Second Battle of Manassas, forcing a Union retreat.  The war, of course, continued for another three and a half years.

The National Park Service has published an online account, and today hosts an re-enactment of the battle (there are worries about the heat, much as in the disastrous 1961 re-enactment).  Visitors will not be able to visit the nearby Disney history theme park, as it was not built in 1994.  An earlier form of commemoration can be seen above (consecrated 11 June 1865).

For more about the preservation of the battlefield site, see Joan M. Zenzen, Battling for Manassas: the fifty-year preservation struggle at Manassas National Battle Field Park (Penn State University Press, 1998; online book).  On the memory of the Civil War more generally, see William A. Blair, Cities of the Dead: contesting the memory of the Civil War in the South, 1865-1914 (University of North Carolina Press, 2004) and David W. Blight, Beyond the Battlefield: race, memory and the American Civil War (University of Massachusetts Press, 2004).  For an account of the battle, including the antics of the Times correspondent, William H. Russell, see Amanda Foreman, A World on Fire.