"That symbol - the Great Seal of the infant Confederacy - sent to it by its nurse, England", or Civil War Digitisation Project Update (II) 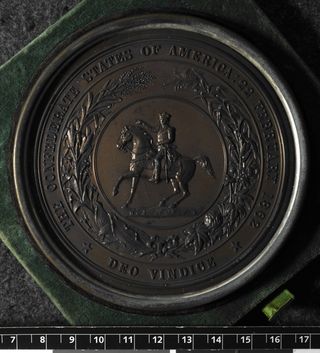 [electroplate copy of the seal of Confederate States of America, Seals.XLIV.229 [1864]]

More images have arrived from the photo studio, including some digital images of the seal of the Confederate States of America that I mentioned in my previous post on the Civil War Project (above; Seals.XLIV.229).

The Library's collections (colony?) of seals are held by the former Department of Manuscripts, which for many years gathered together articles on items in its collections, and which are available in the 'Pamphlets' collection in the Manuscripts Reading Room.  A note attached to the seal (and reference in the Pamphlets card index catalogue), led me to Pamphlet 1072 (vol. LXXV), about fifty steps from my desk.  All very satisfyingly old-fashioned.

Bound in the 75th leather volume is Sigillologia.  Being Some Account of the Great or Broad Seal of the Confederate States of America.  A Monographby 'Joannes Didymus Archæologos', published in Washington, D.C., 1873, and sold for 25 cents.  Another copy is held at shelfmark 8176.b.5.(24).

The author begins with a long quotation from Harper's Monthly Magazine(Feb., 1869), which, writing during the Reconstruction period, recounts 'the extraordinary spectacle... of the efforts of an oligarchy, small in numbers, but powerful in influence, to establish another nation within the bounds of the Republic [during the Civil War]... and to give it the symbol of sovereignty in the form of a Great Seal.'  Provided by 'its nurse, England', the seal was believed lost and, Harper's continued, 'antiquaries of the future, will search in vain for an impression of an emblem of sovereignty of the 'C.S.A.'  None was ever made.  The broad seal of the Republic kindly covers the dishonored ashes of that child of sin'.

During its first year, the Confederacy passed a law establishing a seal for the republic, deciding that the work would be executed in England.  James Mason, the Confederate's envoy in London, was sent a copy of the act, and a photograph of the equestrian statue of Washington in Richmond, D.C (designed by Thomas Crawford).  The founder of the USA was also to be the symbolic founder of the Confederacy, surrounded by the agricultural products of the southern states.  Mason thought that cotton, rice and tobacco were 'distinctive products' of the Confederacy, and omitted wheat and corn, since these were produced in the north as well.  Finally completed in 1874, it was sent, along with wax, paper and an iron press (which, it seemed was then sent under seperate cover), in the care of Lieutenant Chapman via Halifax and Bermuda (where, to avoid the risk of Union interception, the press remained),  Chapman being 'charged, under no circumstances to run the risk of its being captured.'

However, the Monthly was mistaken in its view that the seal melted in the ashes of the Confederacy. In 1873, Charles Colcock Jones received a letter:

At considerable trouble and expense, I have been so fortunate as to rescue this interesting memorial from oblivion, and, possibly, a vandalic melting pot (it is of pure silver, and weigh several pounds).  I have had many electrotype impressions of it executed, and in deference to your antiquarian and archælogical tastes and devotion to the Lost Cause, have the pleasure of handing you, herewith, the first one finished, which you may regard as a proof-impression before letters...'

Hoping to raise funds for the relief of the (southern) needy, as well as perpetuate the self-regarding memory of the Confederacy, a electroplated copy had been produced.  This was authenticated by J. S. and A. B. Wyon, Chief Engravers of Her Majesty's Seals, whose predecessor, Joseph Wyon, had produced the original 'symbolical emblem of sovereignty' in 1864.  It seems that other impressions were made at the time for official use.   The author of Sigillologia also wanted it to be known that he was producing impressions in gold, silver, and bronze, and were available for purchase...  The present copy was donated to the British Museum by J. F. Pickett, of Washington, D.C. in 1874.

As such, it is a reminder of the 'nurse' of the Confederacy.  Along with cruisers, uniforms and other materiel, Britain sold postage stamps and the necessary equipment of provide the new republic with the 'emblems of sovereignty.

The Seal now resides in the Museum of the Confederacy in Richmond, VA (along with materials relating to its rediscovery).

The American Civil War in the Round (Digitisation Project Update I) 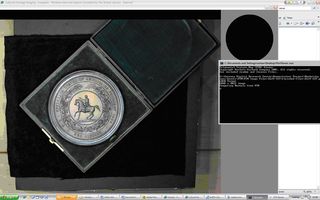 As I've mentioned before, thanks to the generosity of the American Trust for the British Library, we have been able to embark on a digitisation and online exhibition project for the Sesquicentennial of the American Civil War.  The focus of the work, as well as helping to develop the Library's digitisation processes and platforms, is to reveal to a broader audience the collection items that tell the history of the British role in the War.  More than a cameo, the fortunes of the British Empire (not least many thousands, if not millions, who were born British or Irish) was closely tied to the course and outcomes of the war.  As well as the geo-political implications, there was also the matter of international trade - and, often, the the supply of goods (and other support) to the Confederate South.   This included the printing of stamps for the South, and we hope to include an image of the die used by a British firm for this purpose.

The image shown above, however, is the electrotype of the seal of the Confederate States of America (Seals XLIV.229), dating from 1864 (or, rather, an image of its image being processed on my desktop).  While two-dimensional digital images are fine for most purposes, and especially so for texts, objects such as these lose more than most in the process of being reproduced for an online world.  So, borrowing some of the techniques picked up during the curation of the Growing Knowledge exhibition, we were able to try a method of rendering objects in what appears to be 3D, known as Polynomial Texture Mapping.  A team from Southampton University kindly came to try out their 'PTM' dome, which records a series of images with light cast from various angles.  These are combined into a single file, which can then be manipulated online, giving the effect of a torch being shone on a 3D surface, casting shadows, highlights and different shades.  Inscriptions and erasures may be able to be seen more easily, and the artefact looks much more realistic.

There are problems, however - not least reflections from metal objects, such as the electroplated seal.  So, Southampton was keen to see what can be done with post processing.  I now have the files, and am in the process of rendering the complete PTM file, and working out how to include the viewer in the online gallery for the Civil War project when it finally goes live.

A Research Guide to Secondary Sources on the American Fifties

Maro, our current ERASMUS intern has been busy over the last few weeks.  One of the first fruits is this bibliography of secondary materials on the USA in the 1950s. The Library holds most of these titles, but we will endeavour to fill the gaps over the next few months.

Maro has broken the period into a number of themes, and has added a few introductory remarks about what she sees as the tenor of the age:

Please Allow Us to Introduce Ourselves: (I) Dr Philip Hatfield, Curator, Canadian and Caribbean Studies

Team Americas has got its hands on an Olympus camera with a video facility and an Apple laptop, and is not afraid to use it.  The first fruit of our labours, number one in an ongoing series introducing various aspects of the colllections, the Team, and how to make best use of the British Library, is a headshot of Phil, our curator for Canadian and Caribbean Studies.  If all works out - and once Matt has got the hand of editing and focus pulling, etc. - we plan on doing a range of introductions to aspects of using the Library.  What would you find useful to find out more about?  Email americas@bl.uk, or use the comment field below.  Or ping us a tweet @_Americas.

Dr Philip Hatfield, Curator of Canadian and Caribbean Collections at the British Library from Matthew Shaw on Vimeo.

Yesterday (1 August) was the 192nd anniversary of birth the author of fishy tales, Herman Melville.  Perhaps in unwitting honour, the BBC showed Major Dundee on Sunday afternoon.  One of Sam Peckinpah's revisionist westerns, with a fascination with the themes of male friendship, hatred and violence, it casts Charlton Heston as a Union Cavalry officer, forced to draft in Confederate prisoners in a campaign against an Apache raiding party.  Critics have neatly mapped the main characters onto those of Meville's Moby Dick, and the not-entirely satisfactory story tells the tale of the consequences of an obsessive idealistic captain on his 'crew' as they head into the watery part of the world, or, in the film's case, the deserts of Texas and New Mexico.