Remembering 9/11 again (or What you won't be reading on your Kindle, part 3) 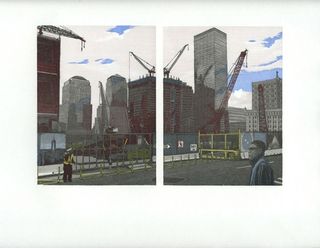 The 10th anniversary of 9/11 is being marked by a steady stream of newspaper features, documentaries on TV, and an ever growing number of books on the subject. In my blog on last year’s anniversary I mentioned Michael Katakis’s Troubled Land series of photographs. Michael’s response to 9/11 was to set out on a trip across America, taking the photos which now make up the aforementioned series.*

A recent issue of The New York Times carried an article on another type of response. New Yorker Richard Goodman rode his bicycle from the Upper West Side down to Ground Zero nearly every day for three months. His experiences during those cycling trips through Manhattan now make up the book The Bicycle Diaries: one New Yorker’s Journey Through 9/11, which is published in a limited edition by Midnight Paper Sales, the press of poet, wood engraver and printer Gaylord Schanilec. The book is illustrated by Gaylord’s distinctive coloured wood engravings and represents the answer to the question he asked himself on the morning of the 9/11 attacks, ‘what can I do?’ Last autumn he accompanied Richard Goodman on a bike ride, re-visiting the same Manhattan streets of Goodman's earlier cycling expeditions down to the One World Trade Center construction site. The engravings in the book are based on the photographs that Gaylord took during that ride. Text and image combine to provide a view of past and present, referencing both the horrors of the original events, and the hope arising from restoration and renewal in the city.

The blending of word and image has always been an important aspect of Gaylord’s work, as has a strong sense of place, so The Bicycle Diaries seems a perfect project for Midnight Paper Sales. To some it might appear anachronistic in these digital days to produce a limited edition fine press book, using traditional letter press printing and laborious multi-colour wood engraving processes, but books can be so much more than just carriers of information. As e-books become increasingly popular, paradoxically, the number and variety of fine press and artists' books that are appearing also seem to be on the rise. Great, we can have the best of both worlds. I'm looking forward to the arrival of the BL’s copy of The Bicycle Diaries and to holding it in my hands. I have no doubt that, to quote from the NYTimes article,  ‘It has the weight of a small thing done with great care to honor a huge loss.’

*We’ll be displaying a few of these photographs in the forthcoming Folio Gallery exhibition which opens on 10 October. The exhibition ties in with the publication of Michael’s new book Photographs and Words, which will appear under the British Library imprint later this month.

Listed below are links to weblogs that reference Remembering 9/11 again (or What you won't be reading on your Kindle, part 3) :

Posted by Carole Holden at 7:25 AM