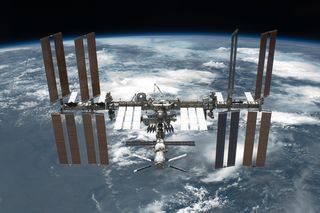 The International Space Station, May 2011

Last night the Quebec Government Office in London hosted the event, 'An Evening in Space with Canadian astronaut, Julie Payette', at the Science Museum's Imax cinema, and Carole and I were invited along. The evening started with a screening of the rather awe-inspiring 'Space Station 3D'. Photographs and videos of space have been part of our visual heritage for a long time and have perhaps lost some of their early impact but the 3D effect and immersive screen reinvigorates the wonder of seeing the Earth from space.

The film is worth seeing, and Julie Payette's short lecture that followed was a treat for anyone who has even fleetingly wanted to be an astronaut. The emphasis of the talk was on how being in space opens up questions about how we relate to land on Earth and our own cultural differences. This was driven home by a great piece of 'it's Earth, but not as we know it' where photographs of parts of the world were shown in a different orientation from that which we would normally see and without any borders or human mapping. The effect of this re-imagining of familiar places was thought provoking and gave an insight into how being an astronaut must drastically change your world view.

One other thing that was mentioned which you may want to know: apparently, you can't see the Great Wall of China from space but you can see the Pyramids and the wake of ferries in the English Channel. It seems the contrast between light and dark is the main way of perceiving things from such an altitude, with the Wall not providing much contrast to its environment while the Pyramids and the bow wakes of ships do.

Finally, the evening drove home to me just how much of a presence Canada has in space, whether it be in the form of astronauts such as Julie Payette or equipment such as the 'Canadarm', a robotic arm used to manipulate loads from the Space Shuttles. You can find out more about Canada's activities in space via the Canadian Space Agency website and more about the International Space Station via the NASA site, or even through the British Library's own resources. I've just been bowled over by the amount of results returned by typing 'International Space Station' into Primo, with everything from books on building the station, to journal articles on experiments run there being available.

Posted by Philip Hatfield at 12:28 PM