A Hankering to Travel: Charles Dickens and North America 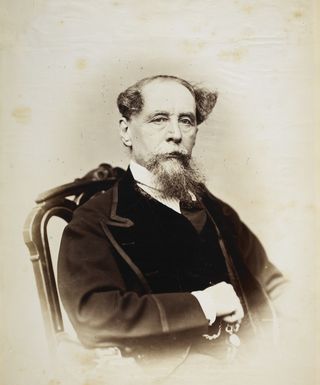 The British Library's Folio Gallery has a new exhibition up, 'A Hankering After Ghosts: Charles Dickens and the Supernatural'. The exhibition has been put on to mark the bicentenary of the birth of Dickens, who was born on the 7th February 1812, and is well worth a look. While I paid the exhibition a visit the other day it reminded me of some of Dickens' writings, which I had been meaning to read for some time, the notes on his travels to North America in 1842.

'American Notes for General Circulation' is a travelogue resulting from Dickens' travels and experiences in America and Canada, the Library holds a copy at shelfmark, Cup.410.g.25. The account is well worth a read for the author's flair and as an interesting travelogue in its own right. What caught my attention was Dickens' devotion of the final thematic chapter to the topic of slavery in America. Dickens is strongly critical of the practice and goes to great lengths to illustrate the horrors of slavery through the reproduction of adverts regarding run away slaves.

Dickens is withering in his criticism of Republicans who maintain a system at odds with their stated values, denouncing these individuals as thinking they, 'will not tolerate a man above [them]: and of those below, none must approach too near' (p. 41). He also notes there to be a significant proportion of this group who would, 'glady involve America in a war, civil, or foreign, provided that it had for its sole end and object the assertion of their right to perpetuate slavery' (ibid). While the causes of the later civil war are complex such a statement does seem unnervingly prescient.

Even though the Library's 'A Hankering After Ghosts' led me to call up Dickens' 'American Notes' this chapter caught my attention for another reason, the Americas department's collaborative doctoral award on slavery in Canada. The award is currently open to applications and anyone who is interested can find more information on this previous post.

Posted by Philip Hatfield at 10:25 AM