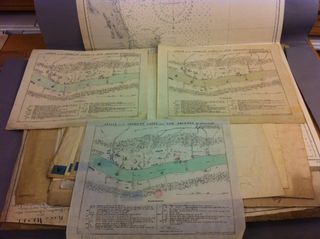 The Royal United Services Institute (RUSI) collection of maps at the British Library reveals the importance of mapping to the work of the Institute, which was founded in 1831 by the Duke of Wellington to encourage the study of naval and military science.  Yesterday, Phil and I visited Tom Harper, the curator of antiquarian mapping, to see what the collections might possessfor our War of 1812 digitization project.   He had kindly pulled from the shelves the very heavy two-volume catalogue to the collection, which is handwritten in leather-bound volumes purchased from the Army & Navy Stores by an Edwardian predecessor.  The collection is catalogued by region and by topic (e.g., Naval, Battlefield, and even Aviation).  We focussed on the United States of America and Canada, passing the numerous maps of the Punic Wars or the Second Carpathian Campaign (and noting details in the catalogue, such as 'to accompany Col. –––––'s lecture'.  Some references noted, we descended below the Northern Line and made our way to the secure 'cage' that houses these particular maps.

We weren't disappointed.  The Battle of New Orleans – tragically fought after news of the ending of the war by the Treaty of Ghent – was clearly an important event for military pedagogy: no fewer than three maps showing the movements of General Edward Pakenham's troops and the defenders under Major General Andrew Jackson are present.  (There was no mention of the forgotten ladders, but a relief drawing of the American defences was present.)  Phil was also pleased to see a number of other maps focussing on the Canadian/US border, with a marked emphasis on defensive forts.  We'll be gathering other materials, and hope to have some proper images on the blog soon.