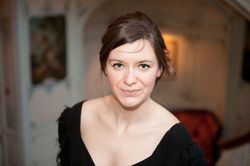 Naomi Wood is the author of The Godless Boys (2011) and is an Eccles Centre writer in residence at the British Library for 2012, working on a novel on Hemingway's wives.  She will be posting an account of her time here on the Team Americas blog over the coming months.

As an Eccles Centre Writer in Residence, I wanted to share some of the treasures I’ve found in the British Library’s North American collections over the course of my residency. These research ramblings may be rather dispirate, but they will broadly follow the course of my research as I write my novel!

The novel is historical fiction and looks at Hemingway’s wives. It is written from the perspective of each wife: having written Hadley and Pauline, (wife one and two) and been up to my elbows in their lover-letters, hate-mail and other billet-doux, I now find myself in the BL looking at his third wife: Martha Gellhorn.

Martha Gellhorn was the only wife to leave Hemingway rather than be left.  She was also the only wife who was also a fiction-writer, and it’s her fiction which has really been making me think this week.

A short time before she met Hemingway, in a bar called Sloppy Joe’s in Key West in 1936, Gellhorn had been touring the States to collect data for Roosevelt’s Federal Emergency Relief Administration. Her remit was to report back to Washington about how the Depression affected ordinary people.

On her travels, which took her from North Carolina to Rhode Island, Gellhorn was outraged by the poverty she saw and the bureaucracy that frustrated relief efforts. Her reports to the White House described in plain but vivid terms the ‘houses shot with holes, windows broken, no sewerage, rats,’ the children malnourished and syphilitic, the land dead and hope extinguished. From Boston she wrote that families were gripped by a ‘fear driving them into a state of semi-collapse; cracking nerves; and an overpowering terror of the future.’

After her tour, Gellhorn collected her observations and published them as a series of eye-watering short-stories in the 1936 bestseller The Trouble I’ve Seen.

I don’t say it lightly when I say reading her stories have made me appreciate that we are living in the recession of 2012 rather than the 1930s.

With tender clarity, Gellhorn writes about characters who have come beyond endurance. There is Mrs Maddison: a woman whose house it ‘shot with holes’ and so papers the walls of her shack with magazine advertisements for skin creams and cars. Then there is Jim, an unemployed man forced into begging, who has to compete with a blindman for the pitch.

But for me, the most remarkable moment I came across can be found in the short-story ‘Joe and Pete’. A woman comes into Joe’s office ostensibly to talk about the city strikes, but in reality she comes seeking warmth. She can no longer afford heating, nor can she afford to eat. It was this paragraph which stunned me and stopped me in my reading. Americans weren’t just hungry. They were starving:

Whatever reasons had moved him to bring her here were forgotten: her poverty and his, and the senseless waiting of their lives. He held her body with his hands, and drew her towards him. And, then, suddenly, he realised without wanting to that the bones of her naked body were an outrage. This was a half-starved woman, no matter how crisply and mockingly she might talk of her life.

‘The bones of her naked body were an outrage’. I think I will remember that phrase for a long time. The Troubles I’ve Seen certainly casts the economic troubles we see in the twenty-first century in an altogether different light.

Because Gellhorn was, first and foremost, a journalist, I’d recommend this book to historians and literature-lovers alike; it’s a fascinating sketch of the period as well as a deeply empathetic take on human endurance through difficulty.

Thanks for that,fascinating,will look out for 'The troubles I've seen'and look forward to your book.

Thanks for sharing Naomi. I didn't know anything about Gellhorn. Sounds like her experiences should be taught in schools across America!

Glad to come across this. I have been interested in Gellhorn for some time. Some of her fiction is also very good. I will look forward to your booko.