The Sinking of the RMS Titanic 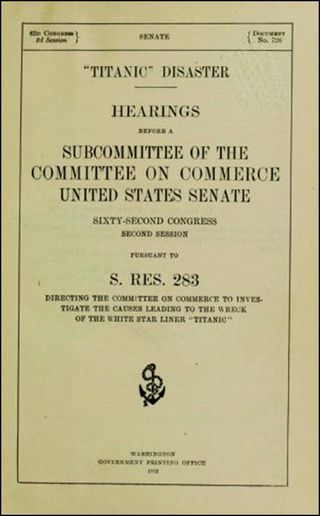 Today marks the centenary of the sinking of the White Star Liner RMS Titanic. The shock waves of the incident radiated through the world in a number of ways. It marked the beginning of the end for the Edwardian period’s “age of innocence”. Since that fateful night in the north Atlantic Ocean where the Titanic collided with an iceberg during its maiden voyage from Southampton to New York, it has embedded itself deeply into our collective imagination. Even after a century, and with the passing of the last survivors and the fading of their stories, the Titanic continues to hold a mass appeal.

From the perspective of Official Publications, the Titanic disaster provides us with two inquiries into the sinking - the U.S. Senate Inquiry: "Titanic" disaster hearings before a Subcommittee of the Committee on Commerce, United States Senate, Sixty-second congress, second session, pursuant to S. Res. 283 directing the Committee on Commerce to investigate the causes leading to the wreck of the White Star liner "Titanic".[shelfmark AS.10/4]

This was convened in New York on the 19th April, just a day after the SS Carpathia had docked with the survivors, in order to get their testimony at the earliest opportunity.  Following this the British Wreak Commissars Inquiry got underway on the 1st May 1912.  The subsequent report Shipping casualties, (loss of the steamship "Titanic"). Report of a formal investigation into the circumstances attending the foundering on 15th April, 1912. [shelfmark B.S.Ref.1 Cd. 6352] was published in July.  Unusually there is, in pencil, an annotated cross reference the the U.S. inquiry added to the entry for the British inquiry in our Reading Room copy of the General Index to the Bills, Reports and Papers of the House of Commons. While both inquiries are available in the library’s collections in various formats there are also digital editions freely accessible online via the Titanic Inquiry website.

The U.S. and U.K. inquiries were criticized at the time for their short comings. Nevertheless, broadly speaking the recommendations for the two reports resulted in the International Convention for the Safety of Life at Sea (shelfmark A.S.10/4) which continues to govern maritime safety today. In addition, the inquiries offer us verbatim transcripts of the examination of the survivors from the Titanic’s passengers and crew, providing an insight into the events of that night from the perspective of those who went through the ordeal.

The Library’s collections are peppered with material relating to the Titanic – some of the most famous contemporary depictions and portraits from publications of the day can be viewed in Images Online . Use the search term “Titanic”.

Some of the more unusual items to be found in the catalogue include sermons and religious tracts relating to the disaster. Of particular interest is a copy of Some reflexions, seamanlike and otherwise, on the loss of the Titanic [shelmark Ashley 484] by the writer Joseph Conrad, who was also an experienced seaman. It is one of only twenty-five copies printed. Conrad also commented on the inquiry in Some Aspects of the Admirable Inquiry into the Loss of the Titanic [shelfmark Ashley 485], another limited edition of twenty-five copies . 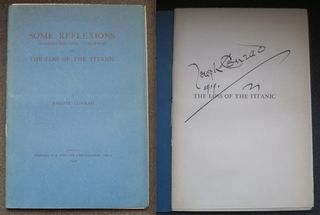 We also have a strong collection of musical scores which where composed following the sinking to commemorate the events of that tragic night a century ago.

Posted by Carole Holden at 2:20 AM