Yesterday, between giving a talk at the Brighton Museum on Magna Carta and watching a two-handed Shona performance of Two Gentlemen of Verona at Shakespeare's Globe (brilliant, despite only catching the word for 'dog' (imbwa)), I needed some food.  Thankfully, the London cafe Look Mum No Hands was at the apex of the relevant railway lines.  But not only were they serving up some tasty food, they were also hosting a book-related appearance of the blogger and writer, Bike Snob NYC. 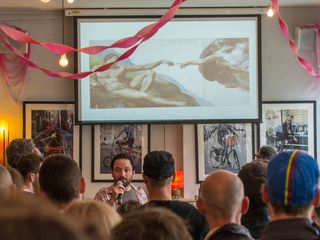 The Snob's blog hit critical mass during the late-naughties' hipster boom in Brooklyn and NY, a time that also saw a marked increase in cycling and bike 'culture' (with a consequent boom in periodicals, zines, blogs and books, such as this one published by the University of Oregon press and reviewed by the non-car-owning David Byrne). So much so, that the identity of the Snob became News That's Fit to Print, and was eventually 'unmasked' by the New York Times. 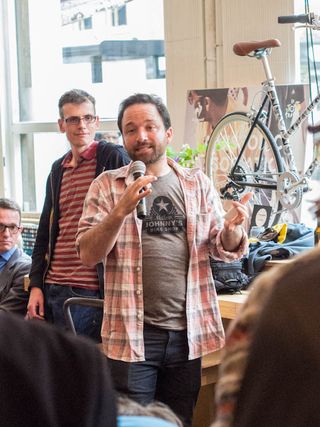 The Snob was in town talking about his second book, The Enlightened Cyclist, which reminds us that the daily commute is perhaps one of the only remaining contacts with have with our primeval state, and then takes the riff from there, bringing together some lame jokes, salient advice, acute observation about bike 'culture' (and some of the best writing I've read about 9/11) in well-designed book that reminds us of why the codex form can work so well.

After an illustrated talk about the indignities of commuting, there was the chance to buy copies, and to have then inscribed by Sharpie (and once again wonder what happens when and if all books are electronic). 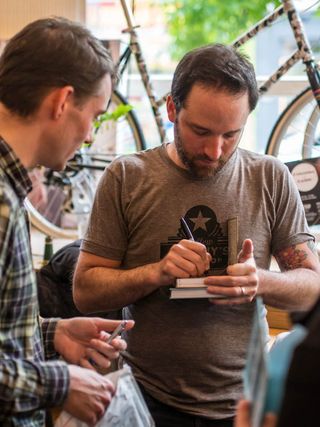 Fortified by my supper, I stood in line, and explained that the British Library was something like the New York Public (without the lions), and that I would add the Snob's first work, Bike Snob: Systematically & Mercilessly Realigning the World of Cycling to the collections.  Would he care to add a message for the British people, and indeed to future generations of readers.  Here it is: 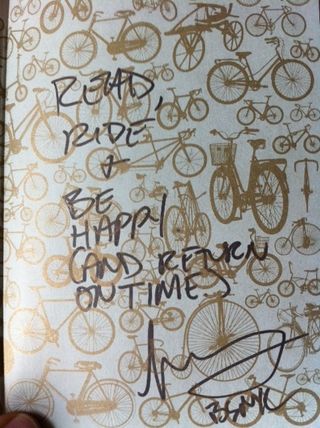 Read, Ride & Be Happy (and Return on Time)

Good advice, especially for a Friday (although, clearly, this will have to be added to Document Supply, rather than reference, stock).

N.B., An earlier blog post talked about some of the resources we have on cycling; the Library's Sports Study Day is also looming (21 May).