The Library's contribution to the Olympic Festival is now off the starting blocks: Writing Britain - from Watstelands to Wonderlands.  Those used to having a sick note on sports days can explore how the British landscape has been written, from medieval chronicles to graphic novels (and To Kill A Mockingbird makes an oblique appearance; can you spot it?).  And it's not just British: we've got a good proportion of U.S. titles in the show, some of which we'll be mentioning over the next few months.

The exhibition is particularly strong on the seaside and other watery parts of these damp isles.  Following a trip to Brighton last week, Graham Greene's Brighton Rock almost jumped out of the case.  Like several titles on display, although the book is British, the U.S. edition has been chosen for display. 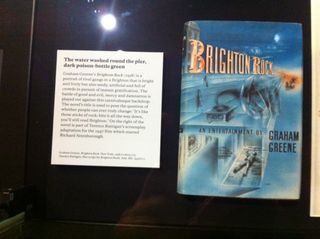 Brighton Rock (that white spot is a light, not a flash)

I've writen here about this edition before, and noted the rather pulpy US cover:

Before the 2011 film (and the 1947 film before that) was the book (and a radio dramatisation and a musical).  And before the book (published in London and Toronto) was the first edition: the 1938 New York publication of Graham Greene's Brighton Rock, published, I'm told, slightly before the British edition.  It is held at shelfmark 012604.l.23.

I recently ordered it up to the Rare Books Reading Room, and was pleased to note that it's been conserved as part of the Adopt-A-Book programme - by the listeners of BBC Southern Counties in 2003.  Clearly marketed by Viking as a thriller, it brought to mind the notes on the early blurbs to Greene novels in America, making him out as something of a pulpy English Raymond Chandler, a writer of 'entertainments' rather than serious novelist.  (Sadly, our copy is not housed with the Salter dust jacket.)

The reuniting of book and jacket is just one small testament to the work the curators have done on the show.  It runs until 25 September.  Team Americas approves.