Cree in the Library 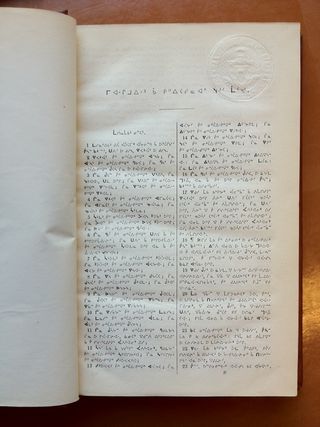 `The first page of the ‘Gospel According to Saint Matthew’ from an 1862 Cree edition of the New Testament [BL Shelfmark: W90-9576].

This updated blog post was originally posted to the Americas Collections Blog in 2012, at the end of a short work experience placement at the British Library:

It became a running joke in my family that I had travelled all the way across the Atlantic to study printed resources related to the history of Canada (and the United States) in the UK. As it happens, exploring North American and Indigenous histories through the scope of the BL’s collections allows for an interesting examination of colonial exchange and the appropriation of language into European systems of power.

On the theme of exploring my neck of the woods from across the pond, I ventured into the main catalogue in search of documents relating to my home region of northern Ontario, with a focus on the James Bay community of Moose Factory (the oldest English settlement in the province and once, the regional centre of trade for the Hudson’s Bay Company). I began researching the Moose Cree dialect, which is spoken by local members of the Moose Cree First Nation and is related to the Cree spoken by other groups throughout northern and central Canada. I discovered that the Library houses one of the largest Indigenous languages collections in the world. My search yielded some interesting resources relating to the use of Cree by European settlers (especially religious figures) during the second half of the nineteenth century. I also found a number of volumes in other languages including Algonquin and Iroquoian. Interestingly, the Library houses the first Bible printed in North America, which happens to be in the Massachusett Algonquian language [BL Shelfmark G.12176].

One book that piqued my interest was an 1862 edition of the ‘New Testament’ [BL Shelfmark: W90-9576], which is printed entirely in the syllabic system developed by Methodist minister James Evans (1801-1846). Evans had worked on creating an Ojibwa syllabary previously in his career, but upon arrival in Norway House (now in northern Manitoba), he turned his attention to Cree, busying himself with translating and printing religious and educational materials from homemade typeface. Up until Evans’ system, the Cree had shared their history in an oral tradition of communication, so there was no need for European-style written language among these groups. However, a rapidly changing world forced a dramatic shift in communication and language-use, dictated largely by European settlers.

Another noteworthy book, directly related to Moose Factory, entitled A Grammar of the Cree Language, as Spoken By the Cree Indians of North America [BL Shelfmark: X22-6409], contains a thorough examination of the structure, orthography and vocabulary of the dialect, this time without the use of syllabics for ease of use by European religious men and women. Throughout the text, Reverend John Horden (1828-1893), then the Bishop of nearby Moosonee, provided practical examples of the language for use by the missionaries working in the region. Like many books of its kind, Horden’s grammar includes a list of useful words and phrases aimed at engaging local Indigenous peoples in order to facilitate religious conversion and assimilation into European systems of commerce and education. Horden expanded his book beyond the basic model of a syllabary, also providing a detailed analysis of the conjugation patterns and rules of syntax.

When one examines who was producing and publishing these linguistic studies, it becomes clear that in the nineteenth century, the language was no longer solely operating within the traditional cultural realm of the James Bay Cree but was being employed by settlers in their own way.  It is important to acknowledge the effect that European settlement had on Indigenous language and culture. These texts highlight a shifting world in which the use of and interest in Cree by the aforementioned European settler authors signalled the beginning of a struggle to maintain traditional knowledge and beliefs. Following the production of these early Cree-language studies, the language itself has suffered ill effects of colonial education, which prohibited Indigenous children enrolled in residential schools throughout Canada from speaking their mother tongues. Cree is just one example of the many languages and regional dialects affected by the imposition of colonial systems of power. Recently, and especially following the Truth and Reconciliation Commission’s report on residential schools in Canada, there is a push to reclaim the Indigenous languages and oral traditions. Perhaps the significant collection of Indigenous language texts at the British Library might allow for a deeper examination of the significance of Indigenous communication within complicated historical contexts?

Posted by Carole Holden at 4:25 PM