From the Collections: Seneca Snakeroot 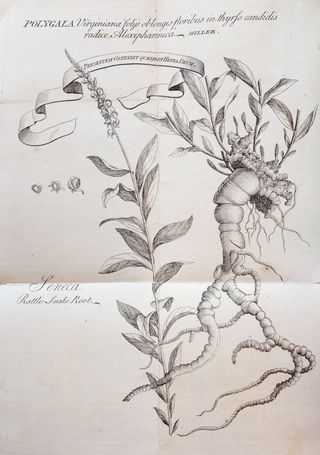 Every once in a while, you stumble across something that really catches your attention.  Perhaps it stirs up a memory, excites a childhood interest or fulfils a passing curiosity.  For me, it was a combination of all of the above.  I had the pleasure of coming across a rather nondescript book in a long list of early American science-related materials that the Library houses, which contained fascinating primary medical research for a wonder-drug that found its way into the hands of an American physician via the Seneca First Nations.

In ‘An Epistle to Dr. R. Mead Concerning the Epidemical Diseases of Virginia …’ [BL Shelfmark: 1170.f.13], published in 1738, Dr. John Tennant set out to demonstrate the real and potential benefits of providing preparations of Seneca Rattlesnake Root to patients suffering from diseases of the lung.  While the Seneca First Nations have used the root as a cure for venomous rattlesnake bites for centuries, Dr. Tennant, having seen the treatment in action, noted similarities between some of the symptoms of a snakebite and the respiratory diseases which plagued Virginians (namely pleurisy and peripneumony).  As a result, he predicted that an infusion of the root might yield positive outcomes in both cases.  He tested his hypothesis directly on his patients with careful consideration of their well-being and was met with some spectacular results.  Some of the stories that he includes are exciting to say the least, with near misses and great triumphs!

This book provides a wonderful, and fairly easy-to read, snapshot of European medical practice in the Americas at the beginning of the eighteenth century.  Along with the application of the root infusions, Dr. Tennant explains how this new treatment fit into contemporary medical theory, discussing it in combination with bloodletting and taking the cardinal humours into consideration.  This document and others like it in the Library’s collections not only provide us with a window into eighteenth century science, but also serve as an ethnobotanical record outlining the uses of exotic plants and their relation to indigenous knowledge.  It highlights the First Nation’s willingness to share ancient information and collaborate with the settlers.  This book can be seen as a bridge between cultures, linking Europe to the Seneca and other First Nations groups.

At around the time that this book was published, Seneca Rattlesnake Root was arriving in Europe for the first time.  It would later become a mainstay of the nineteenth century pharmacist’s cabinet as a treatment for pneumonia.  Today, it is harvested in North America by the First Nations and sold all over the world to ease the symptoms of respiratory ailments.  It regularly appears as an ingredient in cough medicines and in drugs produced to treat bronchitis and asthma.  For additional information visit the Government of Canada’s ‘Seneca Snakeroot’ information page here.

Posted by Philip Hatfield at 9:32 AM