Martha Gellhorn, pursued and in pursuit 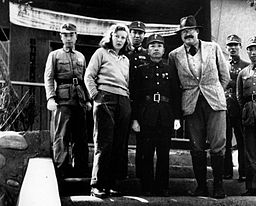 An exciting new acquisition for the British Library’s North American collections comes in the form of Martha Gellhorn’s first novel, What Mad Pursuit. I have been in pursuit of this rather costly book for a while, so it was delightful to finally have the book in my hands.

The rest of Martha Gellhorn’s work is easy to come by, so why is this book so elusive, and so expensive? Published in 1934 when Gellhorn was only twenty-five, the novel attracted lukewarm criticism at best. Gellhorn consigned her debut to the past: she never listed it in her published works, and, once it had become out of print, it stayed there.

But reading the first and only edition of What Mad Pursuit has been a real pleasure. Crude as it is, the novel races though the tender years of protagonist Charis Day from her job as a cub reporter to her love affairs that abruptly – and syphilitically – end. (Four publishers had previously turned it down on the basis that it was altogether ‘too bold’ for a young female novelist.)

Bold it is; and brave too, even as the melodrama skates. Charis, the innocent chasing after justice and happiness, is a standalone protagonist, very different from Gellhorn’s later characters. One reviewer called What Mad Pursuit ‘palpable juvenilia’ – and that’s precisely why it’s interesting: it helps tell the story of Gellhorn before she became the feted war reporter, and before she became the second half of a very famous literary marriage.

Gellhorn chose to preface her first novel with an epigram from Ernest Hemingway’s A Farewell to Arms. Hemingway was Gellhorn’s literary idol: it was his prose which she held up as the perfect model; his photograph that was pinned against her college wall while she wrote.

On the novel’s publication, Gellhorn was two years away from meeting her hero; six years away from marrying him. What tickles me most as I look over Hemingway’s pontifical epigram – Nothing ever happens to the brave – is trying to puzzle out to what degree Gellhorn intentionally began her own mad pursuit of her author-hero.

History has it that the Gellhorn family encountered Hemingway on an unplanned detour to Key West during a Florida vacation in 1936. Was Martha’s plan merely to meet her hero? Or to seduce him and make him her husband?

Biographer Caroline Moorehead’s account of the meeting seems innocent enough. ‘They didn’t much care for Miami, and so they caught a bus to Key West… One evening they went for a drink in a bar called Sloppy Joe’s. Sitting at one end was Ernest Hemingway… reading his mail.’ But in Hemingway’s Boat, Paul Hendrickson casts it quite differently, arguing Martha was as much the ‘shameless’ pursuant as his second wife Pauline Pfeiffer had been a decade ago.

The questions over Gellhorn’s intentionality gives me ample room to explore in fiction what went on in those few juicy weeks Martha Gellhorn spent in the company of Mr and Mrs Hemingway. I wonder if Mrs Hemingway had seen the epigram to Gellhorn’s book; whether she noticed how glad-eyed Ernest became whenever Martha was near; whether it was difficult to watch Ernest in hot pursuit of the young woman as the author followed her on a train to Jacksonville. It strikes me now that perhaps it wasn’t so much the mentor who was in mad pursuit of the tutor, but the other way around.

Naomi Wood is one of the 2012 Eccles Centre Writers in Residence at the British Library.