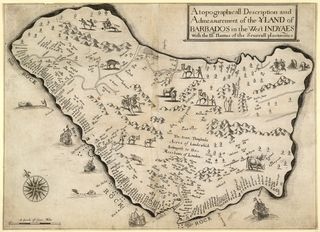 The British Library holds a significant collection of published material relating to the history of Barbados, some of it dating back to the mid-seventeenth century, and the above map inspired me to post about some of it here. Ligon's 'A True and Exact History' is one of the earliest publications the Library holds relating to Barbados (there are a couple of earlier works about English Civil War related strife in the 1650s) and it contains a number of interesting details about an island which was only settled by the English in 1627.

Ligon's account places a significant emphasis on the flora and fauna of Barbados as well as the fish and mammals encountered on his journey to the island. Of particular interest here is the long section given to the description of sharks and the animosity felt towards them by the ship's crew, who reserved gruesome fates for any of these predators that they caught (pp. 5-6). The other thing that jumps out to the reader from amongst the wealth of botanical and zoological information is a note on p. 58 about the presence and use of camels on the island. It would seem they were highly valued for their durability and use for carrying heavy loads, it also illustrates how quickly Barbados became part of a global exchange mechanism. 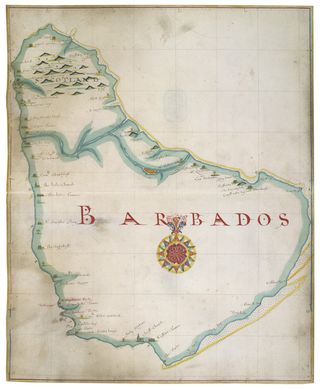 Within these notes on the bounty of Barbados is the ever-present detail of the darker side of the island, its economy and politics. That slavery quickly became a brutal part of the island economy is illustrated by the two hunted runaways seen on the top map, as well as extensive notes found in the text. While Ligon makes little direct mention of the effects the English Civil War had on the island shortly before his work was published the tensions which existed are hinted at by the informal punishment allotted to the mention of the words 'Roundhead' or 'Cavalier' (p. 57).

While Ligon skirts around most details of the conflict in Barbados other writers see it as a significant incident related to wider problems with the island's administration. As such, one of the first books printed on the island, 'Some Memoirs of the First Settlement of Barbados' [published in 1741. Shelfmark: G.14967], notes the events that led to the Civil War playing out in Barbados and highlights key events in this conflict. It also concludes with a lengthy treatise on fairer government and the benefits this would bring to the island, a hot topic in the Americas at the time and one that would be debated in various forms during the history of the colonial Caribbean.

Posted by Philip Hatfield at 11:08 AM