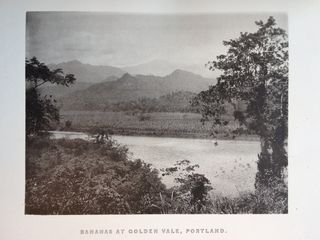 Some of us here at Team Americas have been trying to find time to look over our collection of photographically illustrated books relating to the Caribbean. Sadly, this has not happened as quickly as we would like,but our intern, Brendan, has just started the ball rolling by looking for Caribbean-focussed works published between 1840 and 1950. So, to mark the occasion, I thought I would blog about some Jamaican items I already know about.

One of the earliest relevant items is a series of illustrations created from the Daguerreotypes of Adolphe Duperly and published in 1840. Moving more firmly into the realm of the photographically illustrated, we have the Mezzotypesof V. P. Parkhurst published in 1887 in Picturesque Jamaica[Shelfmark: 1790.b.9]. Parkhurst's work depicts many Jamaican landscape scenes, although emphasis is placed on wild, dreamy spaces and scenes of the managed or built environment are eerily devoid of life. In many ways, his work sets a tone for the tourist photography which would later be so prevalent in Jamaica. 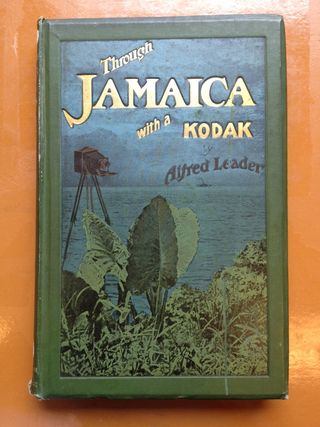 Parkhurst's romanticised visual imagination of Jamaica is not a unique one, indeed his framing of the island is one seen repeatedly in the various illustrated travelogues which would follow this work; and they were many, thanks in part to the technical advances in photography and the work of Eastman Kodak. These same advances meant cameras were increasingly able to photograph people and every day scenes in reasonable clarity, meaning Jamaica's populace could now be bound into the same romantic and objectified imagination of the place.

One of the most notable examples here is the work of Alfred Leader and the book, Through Jamaica with a Kodak[010470.e.5]. Leader's cover (above) is something of a statement of intent, the camera looking like one of H. G. Wells' tripods and reminding the viewer of Susan Sontag's thesis that photography is an inherently aggressive act. These works are not unique in terms of the photographically illustrated books I know from the collection, with A Glimpse of the Tropics[Shelfmark: 10470.ee.9] and, another, Picturesque Jamaica [Shelfmark: L.49/233] producing similar tropical paradise imaginations. What the rest of our photographically illustrated books hold I don't yet know but will keep you posted.

Posted by Philip Hatfield at 4:07 PM

I understand, what with the football and tennis all going on!
Cricket and the Stanley Cup!