It's July 4, a day to celebrate the birth of the USA (and my brother's birthday).  Sadly, Team Americas doesn't follow the custom shared by many Embassies of observing both home and away public holidays, so instead I popped out to lunch at a newish nearby cafe called Fork, where they not only had suitably American pastrami and rye bagels, but also a special on blueberry pancakes and maple syrup (from Vermont, Pres. Bartlet would be sad to observe).  And with this, we can serve up a post from this time last year, on the topic of declarations, maps and counterfeiters: 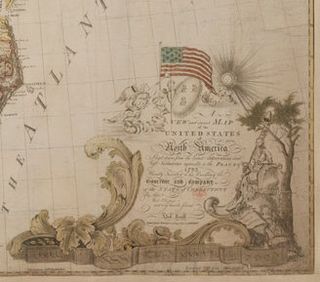 A new and correct map of the United States of North America: layd down from the latest observations and best authorities agreeable to the Peace of 1783...(Newhaven: publish'd according to act of Assembly, [1784])[Maps * 71490.(150)]

Counterfeiting attracted some of the cruelest punishments in the past, in order to reflect the severity of undermining the coin of the realm.  But, in 1764, the prosecutor of Abel Buell, a 22-year-old engraver and silversmith, who had been knocking out dodgy thirty-shilling notes in Connecticut, excercised a little mercy.

As punishment for his crime, 'the tip only of Buell's ear was cropped off: it was held on his tongue to keep it warm till it was put on his ear again, where it grew on. He was branded on the forehead as high as possible. This was usually done by a hot iron, in the form of a letter designating the crime' (John Warner Barber, Connecticut Historical Collections, 2nd ed., New Haven, 1836, pp.531-32, quoted in the catalogue for Christie's sale 2361).

Buell moved to New Haven in 1770, where he became the colony's leading copper-plate engraver and, in 1784, producted the first map of the new United States to be published in that country.  It was also the first map published in the new nation to depict the Stars and Stripes.  Eagle-eyed readers may note the absence of New York City and spot the placing of the prime meridian at Philadelphia, the seat of the new government. 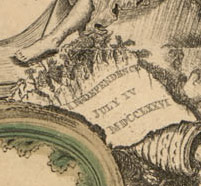 A copy was sold in recent years, and is now on display in the Library of Congress (above).  The British Library's copy at shelfmark Maps * 71490.(150) is similarly hand-coloured, and also shows the small scroll celebrating 'INDEPENDENCE/ JULYIV/ MDCCLXXVI'.