Only Connect: the secret lives of Hemingway's wives 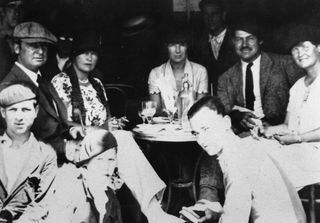 Ernest Hemingway sits in between Pauline and Hadley on a holiday in Spain in 1926. Pauline would become his wife the following year. Photograph in the Ernest Hemingway Photograph Collection, John F. Kennedy Presidential Library and Museum, Boston (Wikimedia Commons)

All the best betrayals start in friendship.  And an eerie effect of researching the lives of the Hemingway women is discovering how deep these friendships went between wives and mistresses.

Hemingway had four wives: Hadley, Pauline, Martha and Mary. At a superficial level, the connections are intriguing. Martha’s father was Hadley’s gynaecologist (eat your heart out, Mr Freud). Mary worked for Hadley’s second husband’s brother in Europe during the Second World War.

These surface connections suggest a global cultural elite. Knowing your husband’s mistress, then, was highly likely. Whether you chose to befriend her was of your own doing.

The archives that exist for Hadley (no.1) and Pauline (no.2) document the women’s friendship in their letters from 1926. I love reading these letters, trying to read between the lines for Pauline’s betrayal but also Hadley’s connivance.

‘I’ve seen your husband E. Hemingway several times – sandwiched in like good red meat between thick slices of soggy bread. I think he looks swell, and he has been splendid to me,’ Pauline wrote to the first Mrs Hemingway in March 1926. How calling Ernest ‘good red meat’ might have provided any reassurance to Hadley, I have no idea, but they carried on being friends. Abruptly, at the end of 1926, the letters end, as well they might when one man transfers himself to his wife’s best friend’s bed.

While I knew about Hadley and Pauline’s friendship, I was surprised to find out about the friendship between Mary and Pauline (no.4 and no.2). Pauline often came to the Cuban house, the Finca Vigia, in the early 1950s, and likewise Mary made the crossing back to Key West several times. It’s thrilling to think of the ex-wife and the current wife’s choice words for their predecessors and successors; not to mention Ernest.

Which leaves me with Martha Gellhorn (no.3). Martha was the only wife to leave Hemingway rather than be left. Although Martha and Mary (Biblical sisters they were not) were in Paris at the same time during the city’s liberation in August 1944, that’s probably the closest they came to meeting.

To my mind, Martha was the outlier in the ex-wife confederacy. After the divorce, it’s silence that characterizes her relationship with the Hemingway clan. Martha refused to be interviewed about her life with him. Unlike Hadley and Pauline, she wouldn’t be part of the ex-wife club.

There is, however, one surviving letter to her predecessor. She wrote it after her first meeting with the Hemingways in Key West in 1937. To my mind, the swinging cadences immediately evoke Pauline’s letters from Paris in 1926, when she was calling Ernest Hemingway a chunk of ‘good red meat’.

‘Pauline, cutie’ it begins - and here I can just imagine Pauline positively bristling - and ends, ‘In passing perhaps it would be as well to tell you that his collected works are pretty hot stuff not to say tops…. What I am trying to tell you in my halting way is that you are a fine girl and it was good of you not to mind my becoming a fixture, like a kudu head, in your home... Devotedly, Marty.’ None-too devotedly: four months later Martha would be in Spain covering the civil war with Ernest  – avoiding getting blown up by jumping into bed together. Hot stuff, red meat; how did the wives not see the writing on the wall?

When I first began my research I envisioned Mrs Hemingway to be a series of interlocking triangles, representing Ernest, wife and mistress, in any given decade. Now, in the midst of these letters and telegrams, it seems much more of a tangled web indeed.

Naomi Wood is one of the Eccles Centre Writers in Residence for 2012. She is the author of The Godless Boys (Picador, 2012).