The Battle of Bladensburg: some War of 1812 project notes 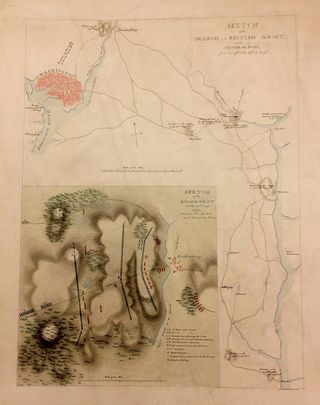 Today marks 198 years since the Battle of Bladensburg, during which a British force landed at Benedict, on the Patuxent River, and marched on Washington D.C. The resulting battle was a victory for the British and ended with the burning of public buildings in the city.

As part of the War of 1812 digitisation project that myself and Matthew are working on I’ve come across the above map of the battle, a black and white reproduction of which can be found in Lossing’s The Pictorial Fieldbook of the War of 1812 (held in a later edition at the Library, DSC 81/8962). The image above is just a low-res copy as we've as yet to start the digitisation in earnest.

Digitisation will start in September, with the first selections (all maps) heading off to Imaging Services. There’s some interesting material in there, including maps of the Battle of New Orleans and a map of the Battle of Moriaviantown. There are also some interesting general maps and atlases which show the landscape and settlements of early nineteenth century North America as well as the theatre of war.

When the first materials go up we’ll let you know.