A History of Conflict: Québec City and War Damage to the Recollect Friars' Church after the Siege of Québec [K.Top 119.30.a]

On Wednesday 24 October we're hosting a talk about a perhaps less well-known part of the American Civil War: the effect of the conflict on French Canada. As usual, this made me think about relevant materials we hold in the collections and the view of Québec history they give us.

Even at a cursory glance the materials held at the Library illustrate that Québec is a city which has been fought over many times in its history and which has been strategically and geopolitically important from the 17th through to the 19th century. This is borne out by materials documenting various British attacks on the city, not least the significant amount of material relating to the 1759 siege of Quebec. Of particular note is the topographical collection of King George III, which contains many items documenting the city (including the above), which was captured by the British the year before George III came to the throne. 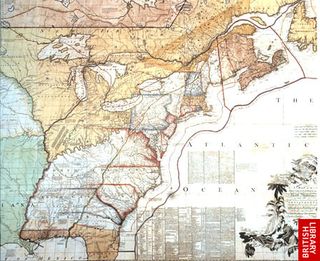 Past this point Québec features in conflicts between Britain and the United States, most notably in the American Revolution, when an American force marched on and laid siege to the city. The failure of this gambit can be argued to have had significant repercussions for the war and the future of North America, and some of this can be seen through the Library’s collections, for example the Red-Lined Map, which served as a benchmark for British negotiators at the Treaty of Paris.

These are two examples of an extensive collection and long history with too much nuance to sufficiently furnish here. For more on French Canada’s (this time less direct) role in North American conflicts, come along to our event on Wednesday night.