The Sense of Hemingway's Endings 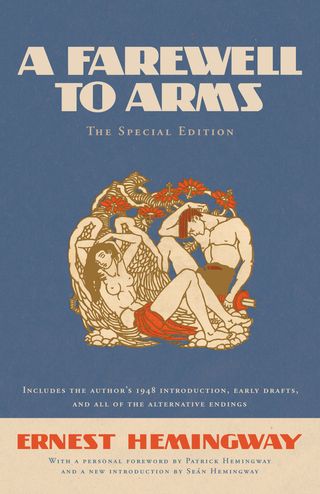 The new edition of A Farewell to Arms published this October 2012 by William Heinemann with the original cover from 1929.

I have been luxuriating this week in a handsome new edition of Ernest Hemingway’s A Farewell to Arms. The book comes replete with cut chapters, new endings and a handful of frankly awful possible titles under Hemingway's heading ‘Shitty Titles’ – ‘Carnal Education’ being one of the bluer offerings.

The real pleasure in reading all of these new endings, all forty seven of them, is that it shows the author gradually whittling his writing down to the essential material. He submerges these drafts in the final publication so that the reader can only see the ‘top’ of the story. It’s his iceberg principle at work.

In earlier drafts, for example, the author plots Henry’s solitary walk home; the sorrowful night-light still on from the start of Catherine's contractions a day ago; the difficulty of burial in a foreign country. In the final version, however, Hemingway lops off the lament and cuts to the final sentence: ‘After a while I went out and left the hospital and walked back to the hotel in the rain.’ The reader is left on the brink of Henry’s loss. For me, the experience is all the richer because our imagination fills in what Hemingway has left out.

'A writer who omits things because he does not know them only makes hollow places in his writing', Hemingway wrote in Death in the Afternoon. The ending of A Farewell to Arms is so far from being a hollow spot precisely because of these early drafts: Hemingway knew exactly where Henry was going that night. Underneath the declarative style is the roiling undercurrent of Henry’s grief.

For all that we think of Hemingway as a master of the minimalist tradition, he was a consummate editor of his own work. He often read all of his material back first and then picked up where he left off the day before. The extra material shows how hard he worked to get at his precise style.

In writing A Farewell to Arms, 'he worked like hell and through it' - so said Dorothy Parker - even changing the ending from what had been serialized in Scribners' magazine to the first edition of the book proper. (Although some critics suggest he did this so that customers would buy both magazine and book – characteristic Hemingway canniness when it came to increasing his bottom line.)

Unlike his posthumous work, where scholars still argue about self-interested editing (his fourth wife edited A Moveable Feast) and savage cuts (almost two thirds was left out from The Garden of Eden in its final publication), we know Hemingway did eventually settle on the designated ending back in 1929.

The alternative endings in A Farewell to Arms give readers an opportunity to see the work evolve, without really threatening the final text. One can happily read The Sun Also Rises without knowing the original beginning that Fitzgerald recommended cutting, just as one can happily read A Farewell to Arms without knowing Hemingway, at one time, considered keeping the baby alive. In not one of the drafts does Catherine live. Regardless of how much he changed his plots, it seems that she was always intended for the chop.

Naomi Wood is one of the Eccles Centre Writers in Residence. She is currently working on her second novel, Mrs Hemingway which will be published by Picador in 2014.