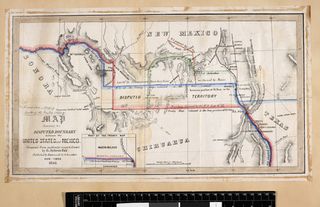 This work (Map illustrating the disputed Boundary between the United States and Mexico, by creator: G. Schroeter; producer: British Library), identified by The British Library, is free of known copyright restrictions.

This map is being digitized as part of the US Civil War project.  It predates the war, of course, but is a record of the western expansion that helped to spark it.  It shows the disputed territory between New Mexico and Mexico following the Treaty of Gaudaloupe-Hidalgo, which ended the Mexico-American War of 1846-48.  The Mesilla Valley offered an important potential railroad route to the West via a Southern route (important to the slave states), but the treaty was based on an out-of-date map favoured by the United States.  New surveys demanded by the treaty revealed the error.

In 1847, a British bank had brought rights to the land, leading to fears of British influence in the American hemisphere (the fears of which Mexico used to good effect with its negotiations with the States), while the Gold Rush of 1848 gave the potential route even more importance. In 1853, the newly elected Pierce administration, which included the future Confederate president, Jefferson Davis, favoured a more bullish policy towards southern expansion and, taking advantage of economic and political turmoil within Mexico and the New Mexico governor's claim to the disputed territories, James Gadsden purchased six packages of lands for $15 million.  Mexico unsuccessfully attempted to persuade Britain to become involved in the negotiations, and the treaty was ratified in 1854.  The US Army took possession of the lands, and became responsible for suppressing the Apache tribes noted on the map (under the terms of the Guadalup-Hidalgo treaty, the US was responsible for protecting Mexican citizens from Apache raiding parties; for their part, the Apaches had been resisting Mexican intrusion into their lands for the best part of three centuries).

The Southern Pacific Railroad, which headed west from Los Angeles, was completed in December 1881. 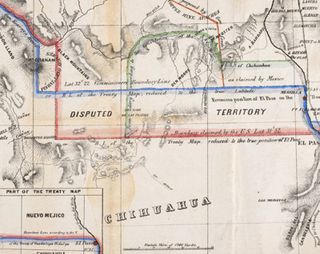