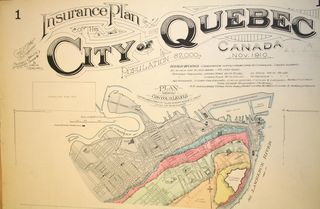 One of my current projects at home has been to find the first OS map that shows the development of the street I live on from a track to a row of houses. Seeing the area around the street develop and change over time is fascinating and explains some of the road’s current quirks – it also illustrates why we have a fascination with old maps.

Hopefully the illustrations for today’s blog will have the same effect for some. While not the oldest map of Québec the Library holds (see here and here for some of those), the Charles E. Goad ‘Insurance Plan of the City of Quebec’ [BL Shelfmark: Maps 147.b.24(1)] is a fascinating depiction of the city in the early twentieth century.

Goad was a British migrant to Canada who started producing fire insurance plans in 1875 before opening a highly successful branch of his business back in London in 1885. The function of his plans was to show companies the fire risk in different areas or buildings in urban locations; and this resulted in a unique visual illustration of the city. 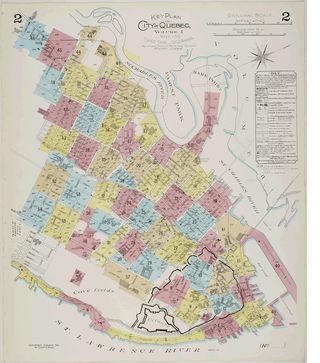 The above sheets are an overview of the city, showing which areas are covered by particular parts of the plan. The detail sheets, operating at 1:600 scale, are a mix of vividly coloured blocks. This design helps the different materials of each building stand out and means fire risks can be easily identified. Today they are also a record of what has changed in the city and what remains the same – and for those buildings which remain unchanged, the maps provide a wonderful insight into the construction of urban landmarks.

What further complements these maps and others like them in our collections are the Canadian photographs that were collected between 1895 and 1924 (you can read a bit more about them here. These can provide views of the streets and businesses depicted on Goad’s (and other) maps, creating a useful hybrid view. This is one of the reasons we are currently working on digitising the photographs, a sneak preview of which you can see here, courtesy of the Europeana WWI project (Europeana Collections 1914-18)