Tecumseh's warriors: First Nations and the War of 1812 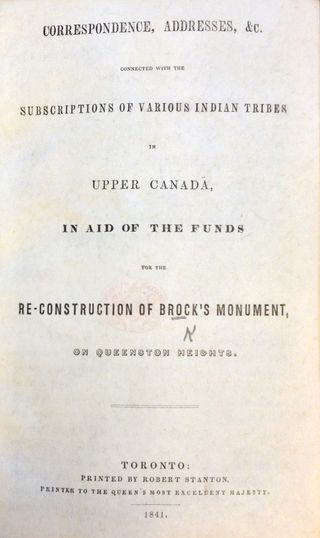 This work (Correspondence, addresses, &c. connected with the subscriptions of various Indian tribes in Upper Canada, in aid of the funds for the re-construction of Brock's monument on Queenston Heights, by publisher: R. Stanton), identified by British Library, is free of known copyright restrictions.

With work still continuing on our War of 1812 digitisation project, Team Americas’ ex-intern Brendan Cull delves back into some of the items he discovered during his time here:

While at the Library I had the opportunity to sift through a variety of resources related to the War of 1812. As I dove feet first into historical documents and current research, it became clear to me that the reverberations of the battles fought were far-reaching both geographically and historically. Recently, many communities and groups in North America have been organizing re-enactments and celebrations to commemorate and explore the period. For example, the Royal Canadian Mint has honoured national heroes such as Sir Isaac Brock, Tecumseh, and Laura Secord with special issue coins.

The War of 1812 affected many cultural groups and highlights the complex relationships between European settlers and First Nations. One item which caught my attention in particular contains a collection of official communications between Canadian government officials and First Nations leaders. “Correspondence, Addresses Etc. connected with the subscriptions of various Indian tribes in Upper Canada, in aid of the funds for the re-construction of Brock’s Monument, on Queenston Heights” [BL Shelfmark: C.42.b.1] contains a series of letters which connect various First Nations groups to the aforementioned British war hero, Sir Isaac Brock (who was killed in the Battle of Queenston Heights alongside his British and First Nations comrades). It begins with an appeal for fundraising, but fast becomes a fascinating record of the thoughts and feelings of various groups, including the Chippewas, Hurons, Wyandotts, Munsees, Oneidas, Mississagas and Mohawks, regarding their involvement in the war effort. These formal statements express outrage towards the defacement of Brock’s final resting place and their commitment to honour Brock’s memory, and by proxy that of their relatives who fought alongside him. By making financial contributions towards the re-erection of Brock’s Monument, the First Nations strove to commemorate their own involvement in many of the same battles in which Brock and, famously, Tecumseh had fought.

These letters are made even more telling when one considers that the American Army would not accept First Nations men amongst its ranks, whereas the British showed some encouragement to them to join in the conflict. An article entitled “Canadian Indians” in the March 9, 1813 edition of the Montreal Gazette [BL Shelfmark: MC270] reports that President James Madison mocked the British for fighting alongside the “red people”. The author makes it clear that while Madison had a negative view of First Nations people, not all Americans subscribed to this judgement; in fact, he draws on personal experience to counter Madison’s stand. These documents give us a sense of not only the politics of the conflict but also the role of the First Nations groups who had an important stake in its outcome.

Posted by Carole Holden at 4:30 PM