Lacrosse was something of an unknown to me until my student days, but given my fondness for most things with an origin in the Americas I've maintained a passive interest in it since. I'm often struck by the fact that many UK-based Lacrosse players are unaware of its origins as a sport played, under various names, by many Native American communities prior to contact with Europeans.

However, I must confess I was somewhat vague on the exact style and form the sport took in Native American communities until I was enlightened earlier this week by George Catlin's, 'North American Indian Portfolio' [1844, BL Shelfmark: 74/651.b.8]. Catlin's work contains a wonderful plate of a game of 'Indian Ball' (to use the author's terminology) in full swing and with hundreds of participants competing on the field of play.

It comes as little surprise that Lacrosse has been much adapted to fit the norms and values of the community it was appropriated to and much of Catlin's account of the games he witnessed illustrates the scale of change. As well as the volume of players the game was also much greater in length (often lasting up to a day) and higher in score (most games ran up to at least 100 goals). 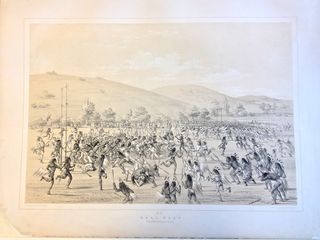 Catlin also notes that the games were an important way for communities to compete with one another and, as a result, individuals were known to find as much fame for their exploits on the sporting field as others found at war (the illustration at the top of the post is a testament to this). Another unique by-product of this import was that wives were also allowed onto the field of play in order to 'encourage' their husbands to defend the honor and possessions of their community more effectively.

I won't claim to know that the Library's collections are a fantastic resource on the history of Lacrosse but Catlin's work provides extensive notes on its Native American heritage. There are also supplementary materials, such as writings by Jean de Brébeuf who is attributed with using the term 'la crosse' when describing the Native American game. An 1877 reprint of 'Hurons et Iroquois' is available at shelfmark 4864.bbb.6 while the work of the Jesuits in Canada is recorded in various items, including a French digest at shelfmark G.4260.

Posted by Philip Hatfield at 12:38 PM