The Great Comet of 1861 and the Civil War

Stargazing was a great success on the telly and under the skies last night; and Lincoln did very well at the BAFTA award nominations.

As a doff of the cap to these two facts, here's an August 1861 political cartoon from Vanity Fair, 'The Great Comet of 1861'.  Playing on the comet that was visible with the naked eye over the US in 1861 as war broke out (the comet was first sighted in Australia in May, and designated C/1861 J1), it depicts General Winfield Scott, the union general who advocated war as the only means to bring the seceded states to heal.  (Note the bayonets in Scott's celestial tail.) 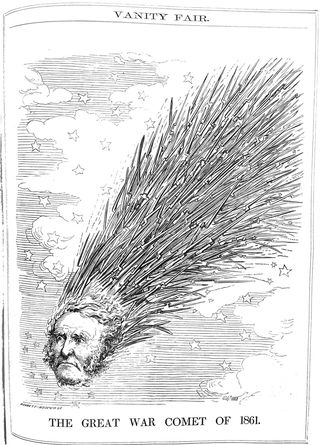 This work (The Great Comet of 1861), identified by The British Library, is free of known copyright restrictions.

Scott's strategy, which aimed to constrict the southern states like a snake, gaven birth to its popular name, the Anaconda Plan, which in turn led to other cartoons: 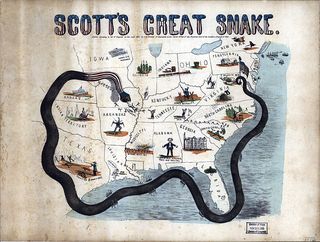 This work (Scott's Great Snake), identified by the Library of Congress, is free of known copyright restrictions.