2013 marks the 100th anniversary of the death of Jose Guadalupe Posada, one of Mexico’s most important and influential visual artists. Posada is best known for his political and satirical illustrations and engravings from the late 19th and early 20th century.

Hundreds of cultural events have been organised across Mexico throughout the year in honour of Posada. Here at the British Library we hold a rather unusual collection of Posada’s work, a set of booklets called the ‘Biblioteca del Niño Mexicano’ or ‘Mexican Children’s Library.’ Illustrated by Posada, the booklets are thought to be the only mechanically produced chromolithographs that Posada ever created. 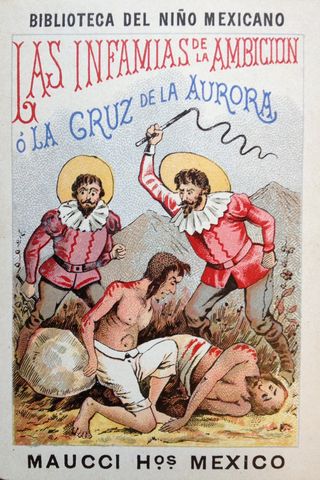 The booklets tell the history of Mexico through short fable like stories that include, Moctezuma and Aztec society before the arrival of the Spanish, the Spanish conquest and the role of the Catholic Church, the struggle for Mexican independence. The series was written by Heriberto Frías a journalist and novelist who, like Posada, was known for his scathing critique of the late 19th century oligarchy, and Porfirio Diaz in particular.

Violence, love, religion, passion, dreams, and the gods all come into play in the creation of a freedom struggle narrative. But there is no ‘grand finale’ to this story. Rather, these tales of struggles against colonial injustice and oligarchic corruption leave a question mark around the future of Mexico. Created at the turn of the 20th century the reader is inevitably left with the question, what next?  At a time of political and social turmoil, that eventually erupted in the Mexican Revolution of 1910, these children’s booklets offered a vision not only of the Mexican past, but also strived to inspire young people to think of its future.

Posted by Philip Hatfield at 3:09 PM