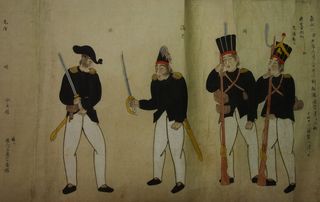 A few weeks ago I was reading a piece in the Guardian about a new acquisition made by our colleagues at the British Museum. They had succeeded in raising the funding (£400,000) to acquire a beautiful 50 foot scroll (only half the length of the On the Road scroll of course!) which documents the arrival of the U.S. fleet in Japan in 1854, under the command of Commodore Matthew Perry (1794-1858). This was a key moment in both Japanese and U.S. history; the signing of the Treaty of Kanagawa took place on 31 March 1854, giving U.S. vessels access to Japanese ports both for refuge and to take on provisions. In addition, the Treaty allowed for a consul to be stationed in Shimoda. Although it wasn’t actually a trade agreement, the opening of a consulate inevitably facilitated trade, and the agreement signalled the beginning of Japan’s economic and political rise, as well as the U.S.’s growing interest in gaining both commercial and strategic advantage in the region.

Perry had entered the U.S. Navy as a midshipman in 1809 and was to enjoy a long and successful career. In 1852 he took command of the East Asia Squad, expressly on the orders of President Millard Fillmore, and was tasked with establishing official relations with Japan, a country which had been closed to most foreign contact for several centuries. Perry first arrived in Edo (Tokyo) Bay in 1853, with 4 warships and a letter for the Emperor from President Fillmore requesting that U.S. ships be allowed access to Japanese harbours. The letter was reluctantly accepted, which was fortunate since Perry’s back-up plan had been to proceed to the capital by force. He and his men then left Japan, but he was to return with his ‘black ships,’ as the Japanese described them, in February 1854 to receive the answer to the letter. The Museum's scroll is the most comprehensive depiction of Perry’s visit from the Japanese point of view. It was made 4 years later but is based on drawings done at the time of the visit. The scroll has just gone on display at the British Museum, and since it is too long to display in full, they will be opening out a new section each month until October. For now, I’ve had to make do with the tantalising glimpse revealed in the article, but I’m looking forward to going to see the real thing. 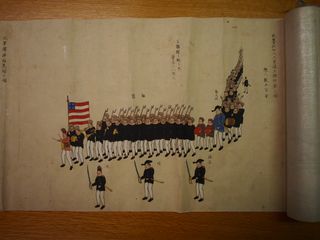 I was discussing the acquisition with our Japanese collections curator and was delighted to hear from him that we in fact also have a scroll relating to the U.S. fleet’s arrival – but ours references that first visit of Perry, when he delivered President Fillmore’s letter in July 1853. So Matt and I of course wanted to take a look straight away. The scroll is very much smaller than the BM’s (10 feet) and much less accomplished (but then it was also much cheaper!) but nevertheless, it’s still very interesting to see the Japanese representations of the arrival of Commodore Perry and his men. Perry is not in fact mentioned by name in the scroll, but it depicts the men in their uniforms, their formal parade with band (see images above), together with details of the men’s hats and instruments, and so on. The final section is a panorama of the U.S. ships at anchor in Uraga Bay. 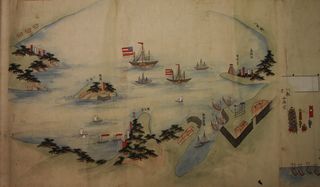 We of course also have the American account of the visits – a hefty 3 volume set Narrative of the Expedition of an American Squadron to the China Seas and Japan, performed in the years 1852, 1853, and 1854, under the command of Commodore M.C. Perry, United States Navy….’ compiled by Francis L. Hawks, Washington: A.O.P. Nicholson, Printer, 1856 (shelfmark: 10057.f.22). Volume 1 has numerous illustrations (and maps), and below you can see the depiction of the presentation of the President’s letter. Interestingly, although the majority of the illustrations are by American artists, the volume also incorporates a number of vividly coloured facsimiles of traditional Japanese drawings. A good deal of volume 2 consists of maps, while Volume 3 is entirely concerned with ‘observations on the zodiacal light.’ 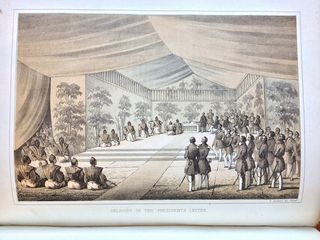 For those wanting to know more about Perry and the ‘opening of Japan,’ you will find numerous accounts in the collections (he certainly isn’t someone who would qualify for our ‘Untold Lives blog). And Perry may well make a re-appearance on the Americas blog since an earlier period of his career connects to Phil's War of 1812 digitisation project.

Posted by Carole Holden at 2:28 PM