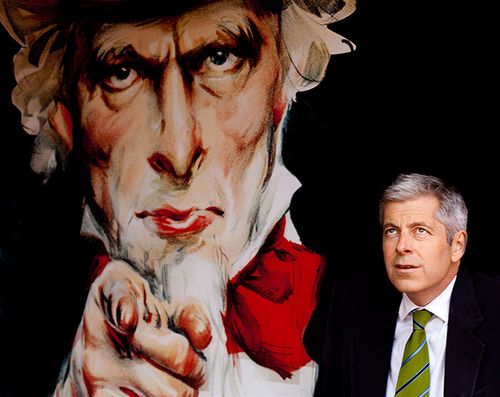 
A portrait of Justin Webb, presenter of the Today programme on BBC Radio 4, just before delivering the third annual Benjamin Franklin House Robert H. Smith lecture in American Democracy ('Wise Up America! A Friendly Word from a Foreigner'), co-sponsored by the Eccles Centre for American Studies at the British Library on 10 May 2013.

James Montgomery Flagg's famous First World War recruiting poster image of Uncle Sam is from the current Propaganda: Power and Persuasion exhibition at the Library, which runs until 17 September.

[Ander McIntyre is a photographer and a Fellow at the Eccles Centre for American Studies at the British Library.  He is an occasional contributor to this blog.]