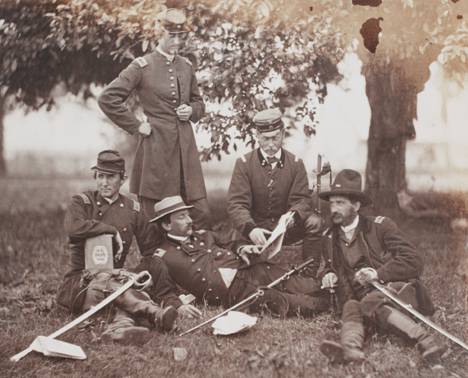 Catherine Bateson, our King's College London MA intern updates us on some of her findings as part of the US Civil War Project:

150 years ago, Lieutenant Colonel Arthur Fremantle of the Coldstream Guards was on a long train journey from Shelbyville, Tennessee, to Atlanta, Georgia. Fremantle was conducting an independent tour of the Confederate States at the height of the American Civil War. He witnessed life on the home-front, military and naval engagements and had met General Robert E. Lee and Confederate President Jefferson Davis. While on the train, which "was much crowded with wounded and sick soldiers", the British officer noticed "a goodish-looking woman". Fremantle reports that this lady had fought on the frontline and that "no notice had been taken of [her gender] so long as she conducted herself properly", though clearly something had happened because "she had been turned out a short time since for her bad and immoral conduct". He offers no further comment other than noting that "she wore a soldier’s hat and coat, but had resumed her petticoats". Information about female soldiers in the Civil War is often hard to come by, though the Library of Congress has recently drawn attention to this intriguing aspect of the war.

Fremantle’s observation is just one of many wartime snapshots Fremantle jotted down in a three-and-a-half month diary of his American adventures, imaginatively titled Three months in the Southern States, April-June, 1863 (General Reference Collection 10411.bb.24.). The diary is a fantastic Civil War primary source, made all the more interesting as it was written from a neutral British perspective. It also contains entries from July 1863, when Fremantle was at Gettysburg observing one of the Civil War’s most famous battles. His account of events of 1–3 July 1863, written as the fight raged around him, remains one of the best eyewitness reports of the battle. The Library holds several copies of Fremantle’s diary, including the 1863 first edition.

Followers of the blog will know that our Civil War project has been going on for a while, begun to commemorate the American Civil War Sesquicentennial – or the easier to say '150th anniversary' – in 2011. The project is finally nearing completion and the website will hopefully be going live in the next few weeks. I’ve been interning with Team Americas for the last month, adding finishing touches to the website, providing detail to the digitised items and highlighting numerous British connections to the American conflict. Fremantle himself gets a reference, alongside fabulous images of maps, photographs, diplomatic letters, wartime objects and my personal favourite, Union and Confederate songs, including several which praise the role of Irish soldiers in the conflict.

In the meantime, the image above is a taster of what will be on display. The photograph was taken 150 years ago this month by Scottish-born Alexander Gardner. Studying the Art of War features Union officers who would take part in the fighting at Gettysburg in 1863. It is tempting to think Fremantle saw similar scenes behind the Confederate line. As has been mentioned on the blog before, photos from Gardner’s two-volume book have already been digitised, and the website will contain more information on a selection of some of the best.

I like to think that if he were around today, Arthur Fremantle would have enjoyed our Civil War project, as like his diary jottings it covers numerous aspects of this tumultuous period of American history.