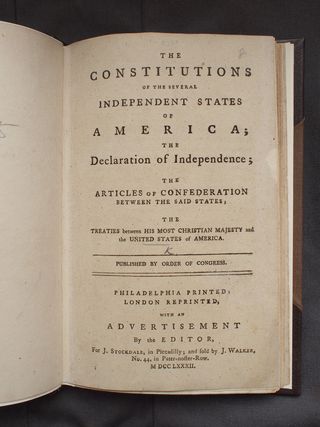 Once upon a time in Seattle, Niles and Frasier Crane decide to dissolve their connections with their wine club and to institute their own (Niles: 'my enthusiasm for the wine club has started to turn...', Frasier: '... it used to be the the wine club.  Now it's just the teasing people club.').  Their enthusiasm for their new club grows apace:

So what's preventing us from starting a whole new club from scratch?

We could really get back to basics!

Something that's just about wine! And a clear constitutional procedure for enjoying it!

Yes, only maybe this time the governing body could be bicameral!

Well, I don't know, Niles, there is something to be said for the parliamentary system!

Well, either way we have to have a strong judiciary to keep it in check.

The next scene opens with Frasier and Niles huddled over their new constitution, quill pen and parchment in hand.

It's not just Frasier and Niles, of course, but the US as a whole could be said to have 'Constitution Complex', with its balanced clauses and elegant eighteenth-century language burrowed deep within the core of national memory.  The US Revolution itself, it could be argued, was also the result of a widespread early American engagement with republican and constitutional ideals.

As a physical document, surrounded by inert gas, and tucked up at night in bomb-proof vaults, the Constitition is something of a civic shrine, often making an appearance in disaster movies: zapped by extra-terrestrials, crumpled by natural disaster, or incinerated by terrorists and troublemakers.

The text also has a strong, online presence, as well as a regular series of books arguing the various sides of how to interpret it, especially since the rise of 'originalism' in the 1980s, a line of political and legal argument that seeks to interpret the Constitution as it was understood by its creators and agreed at the Ratification, 225 years ago.  The founding fathers, in these readings, are often found to be rather conservative in outlook.  Others read the text as a 'living constitution', a founding document that nonetheless has to change with the times.   (The tone of the debate sometimes brings to mind Frasier's criticism of the original wine club).  For a balanced starting point, the Library of Congress offers a good overview of many online resources, as, of course, does the US National Archives. (And, dare we say it, our own Online Gallery feature on the American Revolution.)

This said, the Complex can't just be diagnosed in the US.  As the imprint above shows, Britain (and for that matter, France), were obsessed with constitutionality.  Printers, such as the pro-revolutionary publisher John Stockdale, found that constitutions, whether printed cheaply or in deluxe vellum volumes, were a good publishing bet.  Frasier and Niles would have felt quite at home.