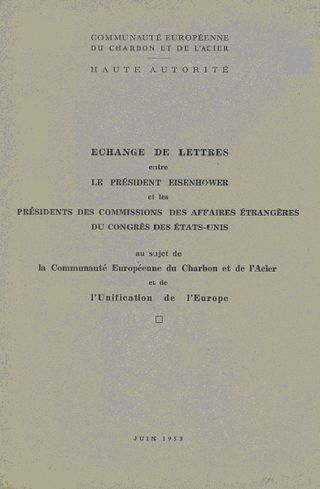 The British Library recently made available the digitised contents of the EU Bookshop via its catalogue: Explore the British Library now provides free access to a range of digitised official publications produced by the European Union (and its previous incarnations) from the mid 1950s up to the present day.

Why would this be of relevance to our Americas blog I hear you ask? Firstly, I hope to make the wider research community aware of the development since there is a wide range of interesting and informative material available on the subject of European integration. But I’m also taking the opportunity to share an interesting primary source that I’ve discovered from within the EU Bookshop collection:

Correspondence between President Eisenhower and Presidents of the Foreign Affairs Committee of the Congress of the United States about the European Coal and Steel Community and the European unification.

This 1953 publication (issued in both English and French), offers an insight to the views of President Eisenhower and the members of the U.S. Congressional Foreign Affairs Committee on the prospect of the Coal and Steel Community growing into a wider European community. All parties were keen that this transformation 'may be speedily developed, ratified and put into force.' (Resolution of 16 June 1953 by the Foreign Affairs Committee of the House of Representatives).

The final part of the document is a communiqué issued from the White House on 3 June 1953, following a meeting held between President Eisenhower and Jean Monnet, the economist and diplomat regarded as the chief architect of European unity, Franz Etzel, and Dirk Pieter Spierenburg. The text notes that while in Europe Eisenhower’s 'experience there convinced him that the uniting of Europe is a historic necessity for the peace and prosperity of Europeans and of the world.' In addition, the document states that in the U.S. 'in the field of coal and steel the barriers, which have so long divided Europe, have been removed so that those basic materials enjoy a single market of 155 million consumers...'

The sentiments articulated in the document echo over time. In recent years I’ve attended many talks and lectures organised by our Eccles Centre for American Studies, and delivered by a range of U.S. statesmen and diplomats. One common and ongoing thread in these events has been the importance of the transatlantic relationship between Europe and U.S.

To close, in a piece on the U.S. and the European Union, I must mention the fine work of the University of Pittsburgh’s Archive of European Integration to disseminate European Union documentation.