Andrea Wulf: Out of Archives and Libraries

As a historian I’m spending much of my time in archives and libraries. Carrying huge folios or maps is the only physical activity involved in that – but sometimes my research takes me to other (maybe slightly more exotic) places.

I’ve just come back from an extraordinary trip to Ecuador and Venezuela where I followed the footsteps of Alexander von Humboldt for my new book ‘The Invention of Nature’. Armed with transcriptions of Humboldt’s letters and diaries – which were of course mostly done in the British Library – I climbed in the Andes, paddled down the Orinoco and got soaking wet in the Llanos.

From 1799, for almost five years Humboldt travelled through South America, Mexico and Cuba – I had only 15 days (and I skipped Mexico and Cuba). I went to the archives in Quito where I saw Humboldt’s passport from the Spanish king and many of the drawings he did while in South America. I saw river dolphins swimming in the Orinoco and capybaras playing in the flooded plains of the Llanos. Tarantulas were our breakfast, lunch and dinner companions – not quite what I’m used to in the Rare Books Reading Room in the British Library.

Most exciting of all, however, were the Andes. Humboldt spent months and months climbing along the mountain chains and valleys, gathering material for his new vision of nature. When he reached Quito in early 1802, he systematically climbed every volcano nearby. He crouched on a precariously small rock ledge on the Pichincha to stare into the deep crater, on the Antisana he encountered rain and wind so vicious and cold that it felt like ice–needles piecing his face, he tried (but failed) to reach the perfectly cone–shaped summit of the Cotopaxi and then went up the Chimborazo (then believed to be the highest mountain in the world).

I tried to do some of this – I got to the crater rim of the Pichincha, but no way I was going to hang over that ledge! On the Cotopaxi we were enveloped in thick fog and didn’t see a thing. My fabulous guide Juan Fernando Duran Cassola found the hut on the Antisana at 4000m where Humboldt spent a miserable night before climbing the volcano. Standing there last month on a clear sunny day with the glorious snow–capped peak of the Antisana behind us and four majestic condors circling above, we were suddenly surrounded by a herd of wild horses. Research can’t get better than that – or, so I thought … until we went up the Chimborazo. 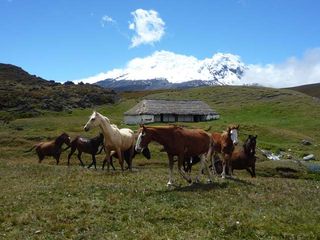 It was on the Chimborazo that Humboldt’s vision of nature as a unified whole came to a conclusion – a web of life in which everything was connected. For Humboldt, climbing the Andes was like a botanical journey which moved up from the equator to the poles – the whole plant world seemed to be stacked up on top of each other. The zones of vegetation ranged from tropical plants to the snow line near the peak. There were palms and humid bamboo forests in the valleys, and further up conifers, oaks, alders and shrub-like berberis similar to those in the European and northern Asian climates.  Higher still, Humboldt encountered Andean zones with alpine plants, many of which were similar to those he had seen in Europe. With ‘a single glance’, he said, he suddenly saw the whole of nature laid out before him.

As we scrambled up the barren slopes of the Chimborazo with the air getting thinner and every step getting harder, I couldn’t imagine how it must have been for Humboldt. At least I had seen photographs of the Andes before I went there, but here was Humboldt, a former Prussian mining inspector, dressed very inappropriately for such a climb and carrying his instruments up the volcano. Every few hundred feet, for example, he would measure the boiling point of water, he measured the blueness of the sky and bottled air to investigate the chemical components. Madness. I was wearing proper hiking boots and only a little rucksack with some food, extra clothes and water (and didn’t have to camp outside) but still every step was exhausting. 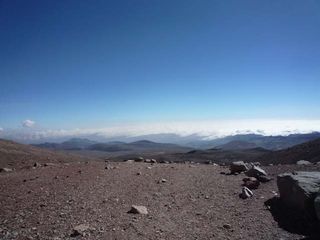 When we reached 5000m (the highest base camp today on the Chimborazo) we stopped – less than 1000m below where Humboldt went. The clouds came rolling in while we were bathed in sunshine. This really felt like being at the top of the world – and very close to Humboldt.

Andrea Wulf is an Eccles Centre Writer in Residence for 2013.

Dear Andrea, Thank you for such a nice Article, I live in Ecuador, and have being in the top of some of those majestic andes volcanos, and wondered many times abouth those early european travelers, La Condamine, Humbolt, Wolf, Hausareck, ...
I write you in regard to part of our history that is little known, little after Humbolt's visit, came the independence war and with it two battalions send by Great Britain, the Rifles and the Albion (instrumental in several key battles) with its comanding officers, Mcintosh, Ilingworth, Talbot, etc, the names of the troops here are unknown, the material they brought also is unknown, their combat reports to London are also unknown. For you having access to knowledge's paradise (The Brithish Library) perhaps is a matter of interest.
Looking forward to read "the invention of nature"
Best Regards