The Art of Occupy 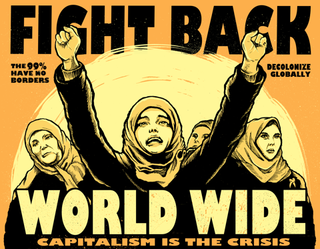 If you’ve been to our Propaganda exhibition (and if you haven't, you only have until 17 September), you might have spotted the above print. It’s in a fairly dark corner, so unless you looked at it carefully (or read the accompanying label) you might not have realised that it is a relatively recent poster coming out of the Occupy Movement. It was interesting to me that Ian, one of our Propaganda curators, should choose that particular poster out of a portfolio of prints that we acquired from Occuprint last year. Viewed up close, the text  'the 99% have no borders' is a bit of a give-away, but from a distance it looks like a fairly traditional political poster which could come from more or less anywhere (in fact it’s from Mexico) and from any period.

The use of prints and posters to disseminate views on political issues and causes is nothing new of course, – they’ve been employed pretty much ever since the invention of printing, but they really came in to their own in the early twentieth century as technological developments enabled the relatively cheap mass production of posters. And they remain a simple but effective way of reaching the public and getting a message or viewpoint across.

I’ve been fascinated by the sheer volume, diversity and creativity of printing that has come out of the global Occupy movement. The portfolio alone is a good example of this – 31 hand silk-screened prints by 31 artists/groups, chosen out of hundreds of submissions from across the world, but all reflecting the values and many concerns of the movement. A fundraising initiative for Occuprint (a non-profit group affiliated to but independent from the Occupy Movement), the portfolio has been issued through the Booklyn Artists' Alliance in an edition of 100. It is curated by Booklyn’s Marshall Weber and Occuprint organiser Jesse Goldstein, together with various other Occuprint editorial committee members. The portfolio also includes a copy of issue 4 (November 2011) of the Occupied Wall Street Journal, a special folio issue on the poster art of the Occupy movement, the curation of which led to the establishment of Occuprint itself. Occuprint’s website was also launched in November 2011 and now hosts hundreds of images, including the portfolio prints and submissions, all of which can be freely downloaded for non-commercial purposes. More posters continue to be added and the website offers not only a wide range of support materials for local activists, but a fantastic resource for studying the art of Occupy (and much more besides). 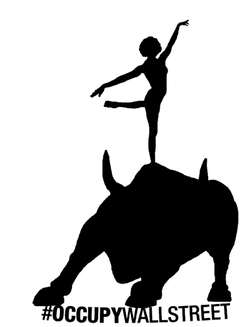 When Occupy Wall Street (OWS) sprang up in September 2011 with the occupation of New York City’s Zuccotti Park, its birth was announced with a particularly arresting and now iconic image – that of a ballerina on top of the Wall Street bull, which appeared in Adbusters, the Vancouver-based anti-consumerist magazine. The bull is just one of the many new symbols that has emerged out of Occupy graphic art, and it is joined by more traditional images (e.g. the raised fists in Fightback), plus appropriations and re-interpretations (e.g. the Guy Fawkes mask, and David Loewenstein's underground 'inverted' fist ).  As Marshall Weber has noted, there is evidence of a variety of historical art influences in the imagery -from Russian Constructivism to Latin American political graphic art to Pop. Although the quality of imagery varies enormously, there are some wonderful, memorable and humorous posters, and it is clear that poster-making is an important strategy for participants of the Occupy movement.

Occuprint organiser Jesse Goldstein describes the graphic work coming out of Occupy as 'social movement culture,' quoting Dara Greenwald and Josh MacPhee’s definitition of this as work 'born from a context in which large numbers of people mobilized to achieve transformation goals.' He says that perhaps the single cohesive thread of Occupy’s cultural work is 'a self-assured dismissal of corporate media channels and the confidence that alternatives can be, and are being, built.' The graphic work is just one aspect of a growing number of cultural practices which include social media, public camping etc., and Goldstein goes on to say that, 'While it’s too early to tell, there does seem to be the possibility that Occupy will successfully reclaim a portion of the cultural commons from a media sphere that has thoroughly infected our everyday lives with ubiquitous branding, messaging, news cycles, and stylized uniformity.' He notes that many of the images on the Occuprint website were created for local use and then passed on to Occuprint, whilst others only exist in the virtual world -'copies without originals.'  He also emphasises the importance of the idea of imagining the future in this social movement culture. 'If anything, the work focuses on the future of the movement itself, and the constituent power that will be required to make the world anew.' - Alexandra Clotfelter’s poster The Beginning is Near, being a perfect example of this. 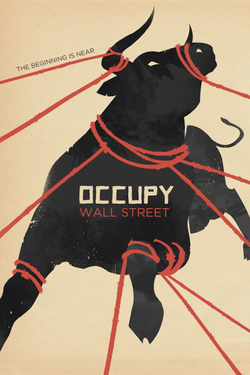 Goldstein acknowledges that 'The images on our site will one day be important, collected, preserved and themselves referenced, as the past is referenced today….The Occupy movement has become conscious of itself as an active producer of history, and this future potential permeates the social movement culture that is beginning to take shape. This, I believe makes the collection at Occuprint an archive of the future.' For me, there was never a doubt that we should have at least some of this material in our collections since it would be important for future researchers studying a whole range of subjects. Aside from the portfolio, we have collected placards, leaflets and other ephemera that help bring to life the movement, culture and a wide variety of political, social and economic issues. The images have in fact already appeared and been discussed and debated in a number of journals and blogs (see below for a few examples). So perhaps not only is the beginning near, the future is now.

Nato Thompson, “Debating Occupy,” Art in America 100, no. 6, July/August 2012, pps. 99-103 (includes several images from the portfolio accompanied by statements from artists, curators, writers, and critics on the impact of the Occupy Movement).

Posted by Carole Holden at 4:24 PM