"All these books are published in Heaven" 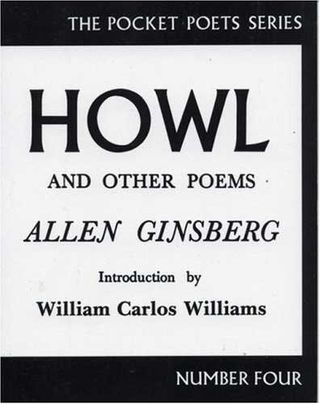 Literary history was made on 7 October 1955, when Allen Ginsberg performed the first reading of his poem Howl (addressed to his friend Carl Solomon, “intuitive Bronx Dadaist and prose-poet”), at the Six Gallery in San Francisco. Kenneth Rexroth presided over the reading (other poets to recite their works that night were Philip Lamantia, Gary Snyder, Michael McClure and Philip Whalen) and Rexroth's wife Marthe published a limited mimeographed edition of Howl and other poems to give to friends. This edition led to the larger selection of poems that was published in October 1956 to immediate and controversial success by Lawrence Ferlinghetti (also present at the reading) as number 4 in his City Lights Pocket Poets series. In March 1957, Customs and police seized copies of Howl when they arrived in the U.S. from their British printer, on the grounds of obscenity. Further sales were banned until a long court case, with Ferlinghetti as defendant, finally decided that material with "the slightest redeeming social importance" is protected by the First and Fourteenth amendments.  This legal precedent was to allow later publication in the U.S. of such works as Lady Chatterley's Lover and Henry Miller's Tropic of Cancer.  Ginsberg’s first collection of poems remains one of the best-selling volumes of American poetry.

Bibliographies of our printed and sound Beat holdings are available on our resources blog page (including our recordings of Ginsberg reading Howl), and all our Beat-related blogposts can be found here.

Posted by Carole Holden at 4:50 PM