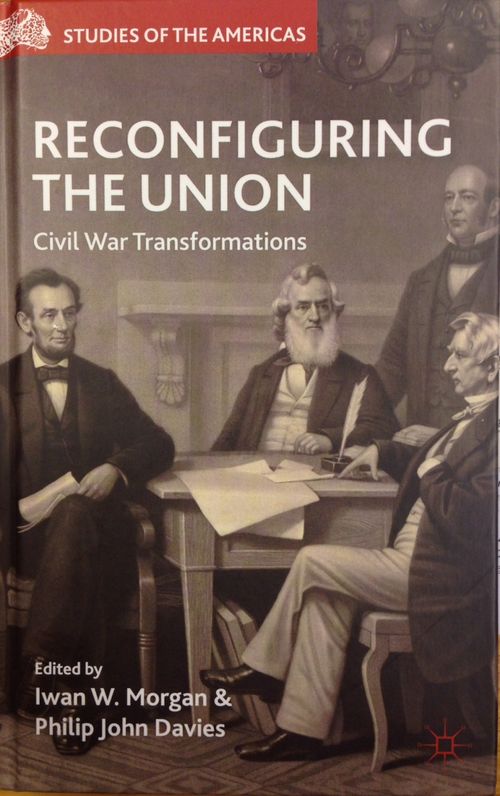 Cover of Reconfiguring the Union: Civil War Transformations.  Image: The first reading of the Emancipation Proclamation before the cabinet, painted by FB Carpenter, engraved by AH Ritchie, c. 1866.  Cover designed by Will Speed.

Back in April 2011, the Eccles Centre for American Studies organised a day conference at the British Library on the Civil War.  Speakers included Amanda Foreman and Richard Carwardine, and the topics ranged from the Irish and the Civil War to Hollywood's 'memory' of the war.  Professor Carwardine spoke on Lincoln and Emancipation, and Dr Foreman considered the Emancipation Proclamation as a propaganda tool.  There was also, I add immodestly, a paper on the nascent US oil industry.

Now, these initial papers have been reworked, rewritten and published in this volume, edited by Iwan Morgan and Philip Davies in Palgrave Macmillan's Studies of the Americas series.  It has the title Reconfiguring the Union, and is available in all good book stores (and libraries).

This is the table of contents:

1. The Civil War, Democracy and the Union; Adam Smith
2. Lincoln and Emancipation: The Lessons of the Letter to Horace Greeley; Richard Carwardine
3. Freedpeople, Politics and the State in Civil War America; Erik Mathisen
4. The Military Significance of the 1864 Presidential Election; Brian Holden Reid
5. In Union There is Strength:' City-Building and Nation-Building in Civil-War Era Philadelphia, 1844-1865; Andrew Heath
6. 'There Will be Blood:' The Civil War and the Birth of the Oil Industry; Matthew Shaw
7. Faugh a Ballagh! (Clear the Way): The Irish and the American Civil War; David Gleason
8. Lincoln's Emancipation Proclamation and British Views of the Civil War; Amanda Foreman
9. Ordeal of the Union: Alan Nevins, the Civil War Centennial, and the Civil Rights Struggles of the 1960s; Robert Cook
10. Glory, Glory: Hollywood's Consensus Memory of the Civil War; Jenny Barrett

And this is the blurb:

"From the perspective of the North, the Civil War began as a war to restore the Union and ended as a war to make a more perfect Union. The Civil War not only changed the moral meaning of the Union, it changed what the Union stood for in political, economic, and transnational terms. This volume examines the transformations the Civil War brought to the American Union as a politico-constitutional, social, and economic system. It explores how the war changed the meaning of the Union with regard to the supremacy of the federal government over the states, the right of secession, the rights of citizenship, and the political balance between the union's various sections. It further considers the effect of the war on international and transnational perceptions of the United States. Finally, it considers how historical memory has shaped the legacy of the Civil War in the last 150 years."