The Earliest Surviving Printed Book from the Americas

Our colleague Geoff West, Head of Hispanic Studies, blogs for us:

As Matt acknowledges in a previous blogpost, the Bay Psalm Book (1647) was not the first book printed in the New World.  Indeed, printing in Spanish colonial Mexico had begun more than a century earlier.  The Aztec capital surrendered to the forces of Hernán Cortés in 1521 and the Viceroyalty of New Spain, covering southern and central Mexico, was established in 1535.  In 1527 the Franciscan Juan de Zumárraga had already been designated Bishop of Mexico City, entrusted both with the protection of the indigenous population, who were exposed to much ill treatment by the Spanish settlers, and with converting them to Christianity.

Zumárraga thought printed materials essential to his evangelizing task.  He had taken some books with him from Spain in 1528, but clearly he saw a need to set up a printing press in Mexico.  The equipment required and supplies would have to be brought from Spain.  In the period 1533-34, when back in Seville, Zumárraga raised the idea of a press with the colonial governing body, the Council of the Indies.  Key to the project was the Cromberger family of Seville who had already produced books for export to New Spain.  The eventual result was the contract of 1539 between Juan Cromberger and an Italian compositor, Giovanni Paoli (or Juan Pablos in Spanish) for the setting up and management of a press in Mexico City.  Although the case has been advanced for an earlier press and although a fragment of an earlier work printed by Pablos indeed survives, his Doctrina breve of 1543/44 remains the earliest complete extant printed book from the Americas.

It is a modest quarto volume containing 84 unnumbered leaves.  Its full title reads in English translation ‘Summary and beneficial instruction of matters pertaining to the Catholic faith and to our Christianity in plain language for general comprehension’. 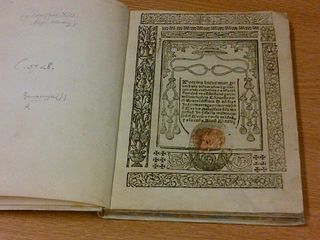 The Doctrina breve is an exposition of the essentials of Catholicism: the articles of faith, the sacraments, the capital sins, the works of mercy, the theological virtues, etc.

A number of other copies of the work are extant and are held in various notable rare book collections, including the Library of Congress, the Huntington Library, John Carter Brown, Biblioteca Cervantina (Monterrey), and the Biblioteca Nacional de España.  The British Library’s copy was purchased on 22 April 1869 for £120 at a sale in Leipzig.  It belonged to the library of the bookseller and bibliophile, José María Andrade, which he sold in 1865 in order to form the basis of the projected Imperial Library of the Emperor Maximilian I.  Following the latter’s execution in 1867 the books were packed up at the instigation of the notoriously unscrupulous Father August Fischer, who acted as Maximilian’s secretary, and sent to Europe to be auctioned.  Our copy still retains the bookplate of the Imperial Library, while the title page bears the ownership stamp of the monastery of San José in Tula. 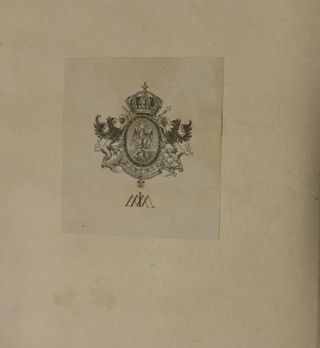 Bookplate of the proposed Imperial Library of Mexico

The British Museum Library, predecessor of the British Library, acquired the core of its collection of Spanish colonial books not only at the sale in Leipzig.  Numerous purchases were also made at the sale of Fischer’s own books (London 1869) and in 1880 at the London sale of the books of the statesman, historian and bibliophile, José Fernando Ramírez.  Additions to the collection are now very infrequent, as Barry Taylor pointed out in this blog earlier this year.

Griffin, Clive. The Crombergers of Seville. The History of a Printing and Merchant Dynasty. Oxford: Clarendon Press, 1988.

Posted by Carole Holden at 2:16 PM