Constitution and Declaration of Sentiments, 1833

The pamphlets, newspapers and magazines issued by anti-slavery societies provide another means for exploring American slavery and the movement for its abolition. The British Library has a rich collection of these publications.

Organised activity against slavery, especially among the Quakers, dated back to the eighteenth century. Pressure from anti-slavery groups helped to achieve an end to slavery in the northern states, and in the 1820s, a manumission movement – which worked towards the release of slaves by their owners – began in the Upper South.

Benjamin Lundy, a New Jersey Quaker, was responsible for the organization of local societies in Kentucky, Tennessee, North Carolina and Virginia. He also established several anti-slavery newspapers, including the National Enquirer (shelfmark: MFM.MMISC321), and The Genius of Universal Emancipation (shelfmark: Mic.A.270.(2)).

It was as a reporter for the latter that William Lloyd Garrison began his abolitionist career. In Boston in 1831 Garrison launched his own weekly paper, The Liberator (shelfmark: NEWS1390199 & Mic.A.3758-3766), which ran until 1865. The following year he organised the New England Anti-Slavery Society, and in 1833 he helped establish the American Anti-Slavery Society. Among the publications issued by the latter and held by the Library are its weekly newspaper, the National Anti-Slavery Standard (shelfmark: Mic.A.16213), which included news items, essays, speeches and letters documenting the abolitionist cause; its Constitution and Declaration of Sentiments (shelfmark: 1389.a.45.(1)); and The Slave’s Friend (shelfmark: 8156.u.48), which was published in 1836 especially for children. 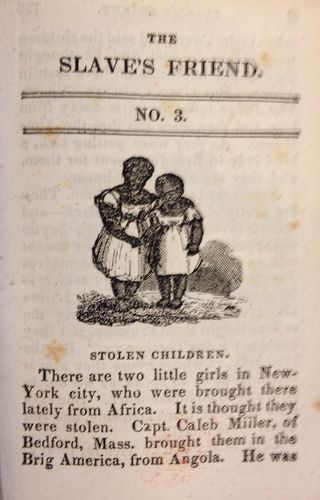 Due to internal tensions, the abolitionist movement was only loosely organised at a national level after 1840; hereafter, the state and local societies became the driving force. Not only does the Library hold many of their publications, but it also possesses those of numerous British organisations dedicated to abolition  in the United States; these include The Anti-Slavery Watchman (shelfmark: P.P.1046.i), which was intended to supply ‘such facts and information, as will show what the British people can do towards the overthrow of American slavery.’

Posted by Carole Holden at 4:11 PM