As mentioned in my previous blog, British and American newspapers and the reports of northern and foreign travellers also provide another fascinating insight into slavery in America.

Adverts for the sale of slaves, either privately or by auction, appear in both northern and southern newspapers. In the early eighteenth century, for example, the Boston News-Letter (available in Early American Newspapers: Series 1*) includes such ads alongside those for farm animals and equipment. In the antebellum South such notices are commonplace, alongside those concerning runaway slaves; indeed, Theodore Weld’s powerful antislavery tract, American Slavery As It Is: Testimony of a Thousand Witnesses (1839; shelfmark: 8155.d.5), is essentially compiled from the testimonies of slave owners as they appear in southern newspapers and court records. The section on ‘Brandings, Maimings and Gun-Shot Wounds’ , for example, lists notices by slave owners describing how their runaway slaves may be identified : one in the Raleigh Standard explains, ‘… a few days before she went off, I burnt her with a hot iron, on the left side of her face, I tried to make the letter M.’

Across the Atlantic, The Illustrated London News (shelfmarks: P.P.7611,  NEWS1377825, and available online in our reading rooms) reported on slavery quite frequently and includes numerous sketches of slave auctions. In one particularly interesting interview, the paper sheds light on a lesser known aspect of slavery: the urban slave. Living in Baltimore, Maryland, the well-dressed interviewee was hired out by his owner and worked as a waiter on a steamship. He gives his owner half his wages, and confides, ‘…she never asks no questions… I gets plenty of money…it’s very easy getting along when you make it a rule never to give no sass to nobody.’ 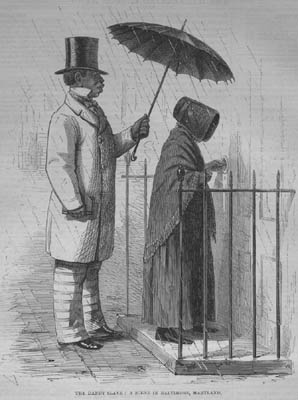 The anecdotes and impressions provided by northern and foreign travellers to the antebellum South are also illuminating. Jesse Torrey, an American, interviewed a large number of southerners for A Portraiture of Domestic Slavery (1817; shelfmark 1389.g.14.(1)). Not only did he affirm the barbarity of slavery to a northern audience, but he also illuminated the fragile status of southern free blacks whose liberty was increasingly curtailed as the Civil War approached. 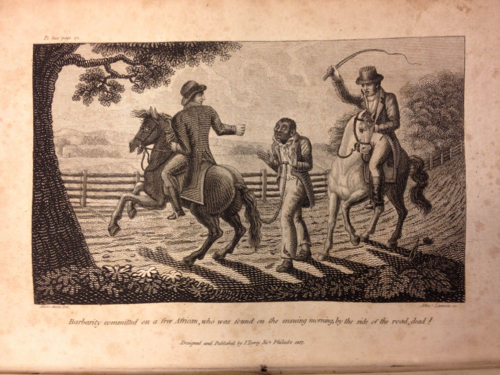 Jesse Torrey, A Portraiture of Domestic Slavery, in the United States....Philadelphia, 1817

Among British travellers to the antebellum South were Frederick Law Olsted, whose classic The Cotton Kingdom (1862; shelfmark: 1608/247) is based on three trips to the South; Harriet Martineau, whose Society in America (1837; shelfmark: 1494.d.7) includes a commentary on the South in 1834-35; and the actress Fanny Kemble, who in 1834 married a wealthy Philadelphian unaware of his family’s plantations. In 1838-39 she finally went South, ‘prejudiced against slavery, for I am an Englishwoman in whom the absence of such a prejudice would be a disgrace.’ What she found there appalled her, and she kept a detailed diary of her stay. Published during the Civil War, after her divorce, Kemble hoped her Journal of a Residence on a Georgian Plantation in 1838-1839 (shelfmark: 10411.bb.15) would diminish pro-South sentiments in Britain and deepen public understanding of the struggle being waged in the United States.

* Available online in our Reading Rooms, but also remotely for registered readers.

Posted by Carole Holden at 1:06 PM