Our colleague Aquiles, one of our digital curators and good friend of Team Americas, has been lending a much needed helping hand whilst Beth is on maternity leave. Last week were were pleased to host a visit for Minister Joaquim Barbosa, Chief Justice of Brazil, and Aquiles notes some of the items that we showed to the Minister:

Apart from seeing some of the Library's treasures, including the Magna Carta, our visitor was also pleased to be shown some of our collections relating to Brazil. Among the items selected for the occasion was the Queen Mary Atlas, which includes one of the first manuscript maps to show Brazil in such great and colourful detail. We also showed a range of European books published between 1550 and 1900, dealing with various aspects of Brazilian culture, society and natural history. Of particular note is the Historiae  Rerum Naturalium Brasiliae (Leiden, 1648), written by the Dutch scientists George Margrave and Wilhelm Pisonis. This was the first scholarly study on Brazilian fauna and flora and was considered the most important reference book on the subject until the nineteenth century. The copy shown to the Minister was part of King George III’s library, and is particularly interesting (and beautiful) as it is the only known hand-coloured copy. 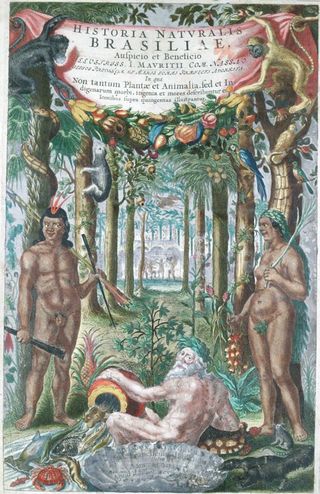 Other items selected included the Constituiçoens Primeyras do Arcebispado da Bahia, published in 1707 in Coimbra, and the Projecto de Constituição para o Império do Brasil, published in Rio de Janeiro in 1824. The former, written by Bahia’s archbishop Dom Sebastião Monteiro da Vide, is a famous historic document which regulated for the first time some basic rights for African slaves in colonial Brazil, including their right to marry without the need to obtain a formal consent from their owners. The Projecto de Constituição was the constitutional document which promulgated the official government structure for the new Brazilian Empire, formalising the country’s independence from Portugal.

The Minister was clearly impressed with our Brazilian holdings and was particularly moved to hold in his hands our fine edition of Gonçalves de Magalhães’ A Confederação dos Tamoyos, published by the Impressão Régia in 1856 under the auspice of Emperor Dom Pedro II. The copy, autographed by D. Pedro II himself, bears a fascinating dedication to his sister Francesca: 'To my dear sister, from the brother who loves you, Pedro.'  This dedication illustrates the close proximity between D. Pedro II and Princess Francesca, especially their mutual interest in the literature produced in their country.